I like to think I am frugal, but sometimes I can be absurd frugal. Let me give you an example.  I have a pair of nail scissors that I once used for something other than cutting nails and broke the tip off one side.  I can’t remember what I was using it for, but it was probably something like trying to turn one of those teeny tiny screws on an electrical gadget. Anyway, I kept the scissors. After all, they still work as scissors everywhere except at the tips. 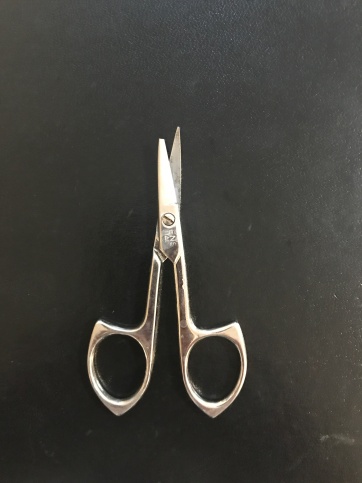 I don’t know why I kept those scissors because I have another, perfectly good, pair and both pairs live together in a jar on my bathroom shelf. Guess which one I pick out first every time I want to cut my nails? Right. The broken pair. It has been this way for months now and only today I decided I should throw out the pair that is now good only for unscrewing tiny screws. Why has it taken me so long? Because I am absurd frugal.

Some of you will recognize this syndrome.  It starts with being really, really careful with money for long periods of time. Then it morphs into being a bit cheap. Then it transforms, like the Swamp Thing, into….gasp!…Absurd Frugal.

I blame my parents. I can do that because they are no longer with us to raise any objections.  My childhood home was not impoverished by any means, but money was always tight. My parents raised six children on my dad’s very limited income for most of their lives. Later, after my mother went back to work, they had one limited income and one part-time income.  In order to make this work as brilliantly as they did, they counted pennies. Literally. There were little piles of coins on the kitchen counter for paying the coalman, the milkman, the insurance man, and so on. They reduced, reused, and recycled everything. Clothes were sewn, mended, darned, and handed down until they became rags. Table scraps were donated to the pig farm for pig food. Wrapping paper was folded and reused. Milk bottles were washed and returned. You get the idea. In a household of up to eight people, there was never more than one garbage can of waste each week.

This, then, was my understanding of how life was to be lived after I left home. In those first few independent years, I did my very best to account for every penny. In fact, I still have my account books from the early days of my marriage in which I itemized everything I bought, even the individual items at the grocery store. Once, when one of my sisters was visiting, her husband saw these and laughed. “What’s this?” he asked. “The ship’s log?”  And, I suppose it was, in a way. I was keeping us on an even keel.

One of the foundations for all this careful note-taking was a fear of debt. Back in the day, there was a moral imperative not to get into debt. It was as if the tentacles of debt would drag you down into abject shame and misery, so you just did everything you could to avoid it. Descriptions of workhouses were still in my mother’s family’s oral history. Banks had not yet figured out that it was in their best interests to lend money to ordinary people, so they made it extremely difficult. For women, it was virtually impossible. So, without the possibility of being given credit, all bills had to be paid directly and on time. If the rent wasn’t paid, you had to move out.  That’s what the song “My Old Man Said Follow the Van” is all about, and although it was intended to be humorous, it also packed a coded moral punch. If you get into debt, you’ll lose your house and end up wandering the streets, lost.

As time went on, banking changed, credit became possible, and my fear of debt subsided. The habits of frugality, though, never went away. Because of this, recently I made myself sick. I had decided to put some marmalade on my toast but when I took the jar out of the cupboard there was a little bit of mould on the top of the contents, next to the glass. No worries, I thought. I’ll just cut that bit out.  And so, I did. I cut out the mould and took marmalade for my toast from what was left. Big mistake.  I was sick with flu-like symptoms for two days afterwards.  I won’t do that again.

When I mentioned to someone that I had done this, she said that she always thought it was OK to cut the mould off of a slab of cheese until she read that the spores can spread all the way through.  Who knew? I’m pretty sure lots of us have been cutting mould off cheese for years. At least, those of us who are frugal have.

Now, though, with this new-found insight, we know we have been absurd frugal. It’s not worth it, folks.  If it’s broken or mouldy, chuck it out.  No, seriously. Chuck it out!! You will not be sent to the workhouse for discarding old, mouldy, or broken things.

Like an alcoholic in recovery, I am trying to shed my absurd frugal habits. It will take a while, though. One day at a time. I’ll start with the nail scissors.

Leave a Reply to The Count Gustaf Cancel reply