After spending two days looking for my reading glasses, the mental walk-back through my activities took me to Tuesday when I had lunch at the Sherlock Holmes Pub in Edmonton. With my purse and pockets emptied out and nowhere else left to look, I called the pub and, sure enough, they had my glasses. Yay! 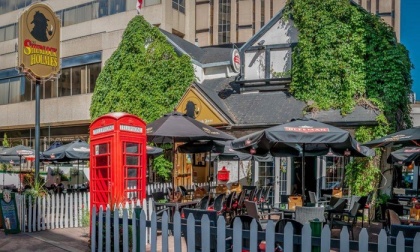 That is why I went downtown today and, after picking up the glasses and being profusely grateful to the staff at the pub, I went to check out Sir Winston Churchill Square. I wanted to see what it looked like without the Happy Wall.

While I was sitting under one of the patio umbrellas there, I chatted with a couple who were also looking around. We agreed that the new library doesn’t deserve the negative criticism it has been getting in the local press.

Some of the criticisms of the library are that it reminds people of a military tank, but as it nears completion it is beginning to look much more interesting than that. It pleases me that the librarians have taken the negativity, owned it, and called the building the Bibliotank. Way to go, librarians! 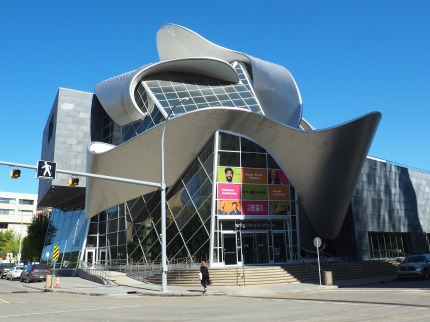 In fact, the architectural design fits in very well with the designs of the City Hall and the Art Gallery of Alberta that also live beside the square. They are all unusual and have a commanding presence. One day we will probably appreciate them just as much as we enjoy the old beams in the Sherlock Holmes Pub today.