Yesterday, for the first time, I went to the Edmonton Folk Festival and now I am hooked. I will definitely go again next year. For this, I must thank someone who, until this week, I only knew by her Twitter name. She had a ticket she could not use and offered it up to the Twitterverse. I was lucky enough to be the first person to raise their hand, and so I got the ticket. 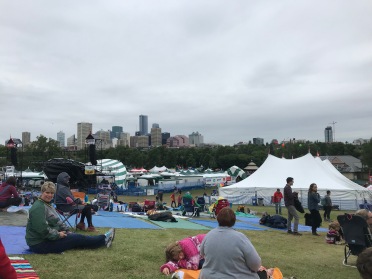 Actually, not only did this stranger give me her ticket, she brought it to my house! I could have gone to her place, but she had a business appointment in my neck of the woods and so she chose to deliver it in person. Not only that, but she walked here from downtown—a couple of miles at least! I know! This is all totally unusual and generous. I am suitably impressed and humbled. Anyway, this ticket committed me to a day at the Folk Festival and I promised the ticket donor that I would go to the event and that I would enjoy myself.

I am a bit of a homebody and I rarely go to events where I don’t know anyone and I don’t know the protocols. As such, I was anxious about going to a festival that I had never been to before, that had strict instructions about access, that had expectations about behaviours, and that had a daunting array of performance choices. I had to think about what to wear, what to take, how to get there, and who I wanted to see perform. But I had a free ticket and I’m a waste-not-want-not kind of person, so I was committed.

When I told my family about my good fortune in getting the ticket, my daughter-in-law immediately said she wanted to go with me and went online to buy her own ticket. I was so pleased! Not only would I have good company, but I would also have the benefit of her social ease. My daughter-in-law is delightfully laid-back and, unlike me, she has no problem in engaging in new enterprises.

After checking the website for the festival, I knew enough to take a tarp, water, bug spray, and cash. We have been having cloudy/rainy days lately, so I also knew we needed rain gear. We took what we had and stopped at the dollar store for a plastic rain cape on the way there. Having evaluated all the possible public transit and park-and-ride means of transportation, we opted to have my son drive us there and use the rideshare drop-off point, and that worked out well.

Once inside the gates and having exchanged our tickets for wristbands, we wandered around until we found one of the seven stages. This is a huge venue but so well organized that someone deserves a medal. During the afternoon we enjoyed shows at four different stages and food and drinks from a wide variety of vendors. Edmonton’s Gallagher Park is a perfect location which forms natural amphitheatres, and the hills and trees provide soundproofing between the stages. 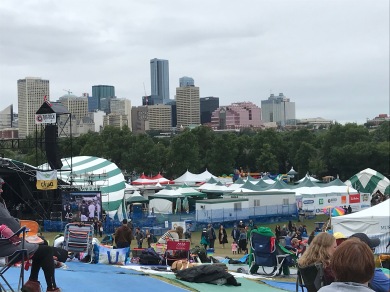 The music was from various different countries and continents, and all of the best quality. The large audience was appreciative of the performances and friendly to one another.

I saw several security and police personnel wandering around with nothing to do. I was also struck by how regular festival-goers knew that it was acceptable to leave a blanket or a tarp on the ground in front of a stage and that no-one would move it or use it. Those tarps and blankets might stay there, unused, for hours, but within five minutes of a particular show, it would be occupied by its owners. This is how they do it. Early-comers get to pick prime viewing spots and keep them even if they aren’t there in person. How cool is that?

Not being a regular or an early-comer, I feared that we might not get good places to sit, but I should not have worried. We enjoyed good spots on the fringes and the freedom to move about with ease. One of the folk festival protocols I discovered is that adults come and go between songs or sets, but children can walk around at will. I love that. Grownups here are polite and children are lovingly and safely accommodated. One small boy wandered about offering mints to complete strangers. It was delightful.

As an aside, one thing that amazed me was that it is possible to put a chair in a small six-inch pouch. The festival permits only low-slung beach-type chairs and many people had brought folded versions. At one performance, a man seated in front of us pulled out a small pouch and extricated a metal contraption that expanded into four legs and a two-part back frame. This formed the structure for a seat cover which was created out of the pouch! Who’d have thought it? I was so impressed, I applauded. It turns out that these are readily available online, but this was the first time I had seen one. I think I embarrassed my daughter-in-law, but she just smiled. She is very kind.

I recommend to everyone that they take the plunge and venture out to an unfamiliar festival either alone or with a companion. You will enjoy some fun moments, some amusing interactions, and some new experiences. If you can get a stranger to get you started by giving you a free ticket, so much the better.