My dad was a fast walker.  When my family was walking up the road to the bus stop, Dad would be way ahead of the pack. Mum and the kids toddled along behind.  I used to think he didn’t want to walk with us, but then I grew up and found that I was a fast walker, too. So are my brothers and sisters. We walk together really comfortably, but we tend to leave family and friends trailing behind. It is a conscious effort for us to walk more slowly in order to keep the same pace as others.

A few weeks ago I enjoyed a lovely walk around a lake with one of my sisters. It was a great opportunity to walk at our comfortable pace, take rest stops when we felt like it, and chat as only sisters know how. It doesn’t matter how long it has been since I saw one of my sisters, when we chat it is just as though we left off talking together only the day before.

The comfort of walking with my sisters now has a wider significance since that concept and phrase have been taken up by a group in Canada. Their purpose is to commemorate missing and murdered First Nations women. The number of these women is not fully known, but one estimate is that there are at least 1,122. In Red Deer, Alberta, this sad truth has inspired a group of people to come together to create a display of the vamps (upper covering) for 1763 pairs of moccasins.  Each pair of vamps represents one of the missing or murdered women, and each has been creatively and carefully embroidered. They are on display in the museum in the form of a winding path that visitors can walk alongside.

One of my friends has been a part of this project and she found that the preparation for the exhibition, which involved sharing circles, planning, cooperation, and hard work, was in itself an inspiration.  There were tears, laughter, and love. 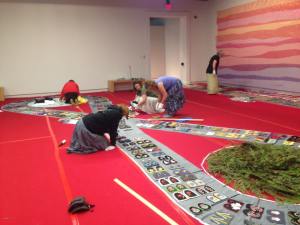 I recently walked beside the moccasin path and thought about the women who have gone by trying to pay attention to each pair of vamps. I noted the different designs, the contrast between the traditional and the modern, the careful beadwork, and the occasional picture or name. But I found it really difficult to look at every one. There were just too many and it was just too sad.

It is a national tragedy, and there are many who would like to see more done to identify the people involved and the social and political environments that conspire together to put indigenous women at risk. The lack of action from police and government has been the subject of documentaries and petitions, and there seems now to be a collective groundswell of outrage.

If I could not walk with my sisters in peaceful conversation and sometimes in quiet contemplation, it would be a huge loss. Now that I see how many women have disappeared or have been murdered in Canada, it makes me realize how many people can no longer walk with their sisters. The exhibit is perfect because it focuses on walking and sisterhood, and when I saw all those moccasin vamps it brought home to me just how many lives have been lost. It also gives each of the missing an individual character. They aren’t just numbers any more. Every one of them is a unique missing sister.