Of all the many exciting, terrifying, celebratory, confusing, and frustrating images to come out of the recent demonstrations and marches, the pictures of non-military men carrying weapons and wearing camouflage are perhaps the most upsetting.

I can’t stop thinking about how their pants and shirts have been coopted to send negative messages. In particular, some of the trappings of the military have been misused to become indicative of something less noble, and less reliable, and less respectable than legitimate uniforms.

When I think of camouflage I think first of hunters. In Canada, where I live, there are many people who hunt for sport and for food. Their hunting is restricted by national and local laws, the number of creatures killed is limited, and the duration of the hunting season is quite specific. Those who hunt in the rural countryside and the forests often wear camouflage. That makes sense. The various shades of green allow them to blend in with their surroundings so that they can hide from their prey.

When soldiers wear camouflage they wear shades of green in forests and shades of beige in deserts. Like hunters, they want to disguise their presence. They haven’t yet come up with a suitable camouflage for urban warfare, so we often see them wearing green camo in situations where a t-shirt and jeans would probably provide better cover.

When I see people out and about wearing military-style clothing, I wonder why. Perhaps they are veterans, and perhaps they are simply supportive of the military, but often I think they are just misfits. They want to be as brave, as disciplined, as well-respected as the military, and the clothing is an expression not only of respect but also of envy. No one is going to thank them for their service, but they can be held in awe if they put up a bold front. 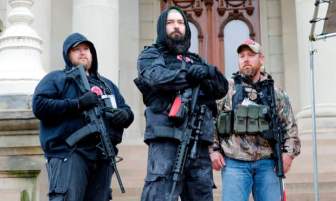 Armed Protesters byJeff Kowalsky/AFP via Getty Images from The Guardian 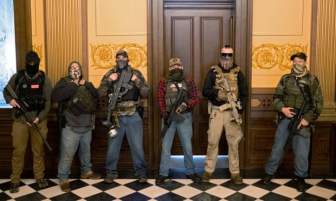 video still from The Guardian

Those people wearing khaki t-shirts and camo pants are not normally a problem. They have chosen a clothing style that suits them, and that’s OK. It becomes troubling, though, when they add weaponry and combat vests to their wardrobe. These men (and occasionally women) who we see strutting around the fringes of the recent demonstrations scare me more than even the vandals and looters.

When interviewed, they claim to be protecting the demonstrators and/or property. I’m sure they believe that. The trouble is, they are terrifying.  I don’t know if they realize that most of us don’t find their presence reassuring at all. 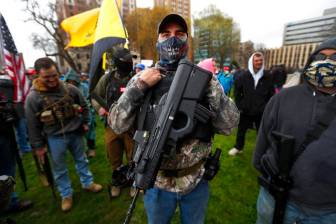 Armed protesters. Photo by Jeff Kowalsky/AFP via Getty Images. From The Guardian. 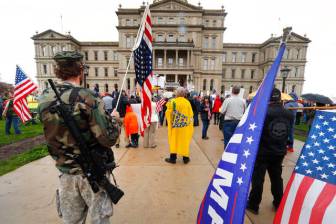 These guys with guns and military gear come across as just more angry guys with no organizational structure and no discipline. The last thing we need tagging on to a social revolution is an uncontrolled army of guys with guns.

The military-style clothing that they wear has been misappropriated. It does not serve to conceal them but rather to make them stand out. Similarly, their purpose is not for sport, or sustenance, or defense, or any acceptable military goal. Instead, they are there to exert power and control over people who don’t have weapons. That’s it.

Without their guns, what do we have? Just a few men with self-esteem issues wearing environmentally inappropriate clothing.

Here is an interesting article about the use of camouflage and the lack of identification of various forces currently being utilized in the United States. Federal Agents Don’t Need Army Fatigues.