In the last week I have gone from thinking “Oh, I’ll be OK” to “Oh, heck. I need an escape route.”

There has been a rapid escalation in the number of cases of COVID-19 and, sadly, in the number of deaths both internationally and nationally. I have been following these trends but nothing has scared me more than the realization that the US didn’t have sufficient test kits to address this crisis.

This fear was worsened by the President’s statements about it being “just like the flu” and “This is their new hoax” and, most bizarrely, “They have to get their vaccines” when there is no vaccine and there won’t be one for at least eighteen months.

I had read enough articles from scientists to know that he was wrong, but too many people got the feeling that everything was in hand and nothing to worry about. That dichotomy, in itself, made me anxious. So, a few days ago I started to think I should leave the US.

This has been a difficult few days for me because events began to change very quickly. Three days ago the US closed the borders to non-citizens arriving from Europe and two days ago Sophie Grégoire Trudeau was confirmed to be infected with COVID-19. Canada began to enact nationwide protocols for addressing the problem, and I began to fear that they might close the border. I also feared that I might get sick and not be allowed to fly.

At the same time, I really want to spend time here with my sister and her family. I love being here and seeing them, and sometimes I am even able to help them out when needed. I had expected to be here until mid-May but within a week all that changed. I went online to see what the airline would charge me for a canceled flight and found that it would cost what I had paid because I didn’t get cancellation insurance. Also, I would have to phone them to make that happen.

After losing some sleep over this, yesterday I decided that I couldn’t afford to wait and see how things evolved. Since I am a senior, I am one of the people most likely to get and respond badly to the virus and my health care providers are all in Canada. So, after talking it over with my family, I called the airline to cancel my May flight and book a new one in the coming week.

Not surprisingly, the airline had been overwhelmed with calls and was no longer answering calls or putting anyone on hold. The message told me to go to the website. By that time, the website had changed. Now I could cancel my flight, get a credit with the airline, and book a new flight, so that is what I did.

I found that if I flew out within the next week the flight would cost nearly $700 but if I waited a week it would cost about $250. I don’t know how they come up with these numbers, but I decided that I could hunker down here for a week and fly out next Friday. So, that is what I am going to do.

As soon as I had booked my flight I started to feel less stressed. Just three hours later, though, something new came up. My travel insurance provider emailed to let me know that their coverage for illness related to COVID-19 will last only for the next ten days. After that, the coverage will cease. Wow.

I had not anticipated that my insurance company could unilaterally change the agreement when the going got tough. But, there you have it. They can do what they like, and they will. 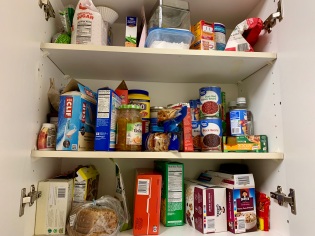 As of yesterday, eight firefighters in San Jose have tested positive for the virus, and more than 5,000 people worldwide have died from it. I have started wearing vinyl gloves when I’m out of the house and I have rediscovered the facial masks I bought a long time ago to wear when using strong household chemicals. I am going to use one when I’m at the airport.

Already the local stores and Amazon have sold out of medicinal masks, hand sanitizer, and disinfecting wipes. They are also running low on things people need when they think they will be housebound for a couple of weeks, especially water and toilet paper.

I have been looking in my fridge and kitchen cupboards and wondering if I can feed myself for a week without going to the grocery store. If I have to go to the store, you can be sure I’ll be wearing my vinyl gloves and my face mask. But, honestly, I think I’ll make do with whatever cans and packets of food I’ve already got. I always knew I’d find a use for that cream of celery soup. I just always hoped it would be for nouvelle cuisine, not novel coronavirus.

I have just been notified that my travel insurance coverage will now include illness related to COVID-19 until April 5. It seems that too many of us could not get flights back to Canada before the 10-day deadline.

Also, the insurance company will cover the costs associated with coming home early because of a government advisory being issued.