A couple of weeks ago, two American women were arrested for carving their initials into a wall at the Colosseum in Rome. They were caught while taking pictures of themselves in front of the graffiti.

The urge to leave one’s mark is not new, and some of those marks are highly prized. As a society we do our best to preserve and protect petroglyphs of bygone civilizations. The trouble is that we don’t all share the same respect for very old things.

I have seen, in Grassi Lakes, Alberta, people’s names and initials scrawled onto walls that display the ancient cave paintings of aboriginal peoples. Most of us revere ancient rock art because it is a link to the prehistoric and because it tells a story or depicts an important event. So, we are upset when someone who does not value the rarity of the art chooses that location to also stake their claim on history.

Would it matter if there were no rock art there but only the initials of modern-day visitors? It probably would not matter as much, but it would still matter. The rocks and caves would still have been permanently altered by modern-day signatories.

Does is matter if the surface they write on is old or new? I mean, does the fact that the walls in Grassi Lakes are in caves make those walls more precious than concrete or stucco walls on city streets? Is carving more significant than painting when it comes to graffiti? Obviously, carving is more permanent and more difficult to remediate, but painting is also difficult to remove or cover over.

In most places, modern graffiti is considered to be anti-social and unattractive. San Jose has an extensive program in place to remove or to paint over graffiti and tagging because it is thought that “failure to abate the nuisance that graffiti represents can lead to property devaluation and community blight.”[1] It is also found to be tied to criminal gangs and gang violence. So, with the help of an efficient phone-in program, volunteers, and contracted workers, graffiti is painted over or removed with solvents within forty-eight hours. 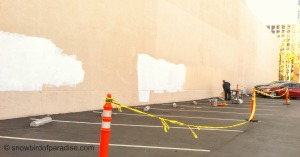 Most people seem to like this program. They think that writing or drawing on walls, sidewalks, and any other available surface is degrading to the image of the neighborhood and the city as a whole. There are some, though, who see art in some of these paintings. It’s a matter of personal taste, of course, but the balloon letters and tags all look much the same to the uninitiated. If there is any other creative design work in my neighborhood, I haven’t seen it. I’m pretty sure that the famed graffiti artist Banksy does not live around here, but even if he did his work would also be covered over within forty-eight hours.

On a recent train journey to San Francisco I saw a lot of graffiti beside the tracks. I went by most of it too quickly for me to be able to make out what the lettering said, and much of it was hastily drawn. Some of it, though, was meticulously detailed with careful lines and multicolored designs. I also saw a mural artist painting the side of a building while being watched by people sitting in lawn chairs. The process was obviously both entertaining and instructive. So, it isn’t all ugly, but the graffiti abatement volunteers and contractors aren’t utilized for their knowledge of popular culture; people just want their walls kept clean.

I have noticed, though, that when graffiti is painted over, the color of paint used is never quite the same as the original wall paint so we are left with blocks or blobs of various shades.  This is an interesting phenomenon. Sometimes the shapes that are painted are fairly accurate squares or rectangles, but others mimic the shapes of the lettering that they cover over. In the eyes of the locals, this must be an improvement, but it seems to me that these shapes create a new canvas for the graffiti artists. They almost cry out to be painted on again.

I have also noticed that when surfaces other than walls are tagged, the graffiti stays on them almost indefinitely. Truck panels, road signs, and utility boxes are unlikely to be cleaned up within forty-eight hours or even forty-eight days. This is probably because solvents would harm the underlying paint and the cost to paint them over with a lacquer would be prohibitive.

It’s also interesting that there is a distinction between legitimate graffiti and illegitimate graffiti. When city utility crews spray sidewalks and roads to indicate locations for excavation or construction, that is considered legitimate. But when someone else sprays their name in paint on the same sidewalk, that is considered illegitimate. Neither is particularly attractive and both can remain visible for months, so I think the distinction is moot.

When the city approves mural art it accepts the value of public art and it sees a benefit to adding graphic design to the cityscape. In so doing, it subsidizes a particular form of visual expression which is usually some form of representational picture or collage. Some cities are using restorative justice programs to engage convicted graffiti vandals, in concert with the property owners, to design and paint murals over walls that have been tagged in the past. This is a great way to steer creativity in a positive direction.

It seems to me that the contract workers who paint over graffiti can learn something about design from the bubble name writers. Similarly, the taggers could teach city utility workers something about lettering with spray paint. Mural painters could hire up-and-coming graffiti artists to learn some professional artistic skills, or perhaps they do that already. I hope so.

Another, more aggressive, idea is derived from an article about paint that resists pee. Someone has invented a paint that deflects urine back onto the urinating person’s shoes, and I wonder if it could be made to work with spray paint. Just as the graffiti vandal starts to paint, they will find themselves being tagged. That would be wonderful poetic justice, don’t you think? They might then be forced to rethink the wisdom of defacing property if the property in question is their own clothing. But, no. That would just make them angry and more likely to tag something less defensive than a specially-coated wall.

I once saw graffiti sprayed on the ivy covering a wall, and that made me wonder about the motivations of the person who did the work. Obviously they did not want to make their mark on history because the leaves would be gone by the following year. Perhaps it was a kind of performance art, deliberately transitory. Or, maybe they were just practicing, and using the plants as a kind of sketch pad. Either way, I noticed and took a picture. Perhaps that is enough.

The need to be noticed and remembered is common to all of us. How and where we choose to do that is where the individual meets society and where vandalism meets art.