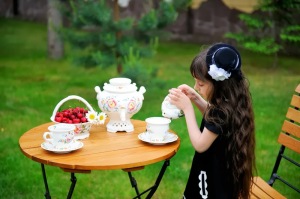 “No, it’s my imaginary friend.”

That’s what she said when I asked her if she was talking to me.  She was in another room, working on her computer. Sometimes she talks on the phone there, so that was my first thought. I could not hear her clearly because she was facing a wall and her words were indistinct. Perhaps she thought I was being snarky by asking if she was talking to me. You know, like Robert de Niro in Taxi Driver.  If so, that would explain her snippy response.

But in a sense she was right. I did think she was talking to someone else whom I could only imagine. Whenever I become aware of someone talking on a cell phone in public, I wonder about their conversation partner. From my point of view, they are an imaginary friend.

Recently, I was at a counter serving a customer at the Restore, and she was on the phone talking to someone else at the same time. She did not explain or apologize that she was engaged in another conversation. She just carried on two conversations simultaneously. That is impressive. I know I could not do that.

When I am on the receiving end of dual conversations it takes me a while to figure out what is going on and what is being said to whom. Usually, the person on the phone doesn’t make eye contact. That would take their focus away from the telephone conversation, and it is the first clue that their conversation with me is less important. The second clue is that they often don’t respond to what I say.

When I see someone walking alone down the street and talking, my first assumption is that they are talking to themselves and that they may possibly be mentally ill.  It takes a moment before it dawns on me that they might be using a phone that I cannot see. So far it’s about 50/50 ill people to phone people.

This is not a new issue, but what is new for me is the idea that all these people have imaginary friends who live only in the mind of the observer. I love the realization that, as the observer, I can picture the person to whom you are talking and you have no control over my imaginings.

I can imagine that you have a secret lover with curly black hair and yellow teeth. Or, I can imagine that you have a nit-picky boss who wears too-tight pants and who questions your every action. Or, you may be talking to a teenage child with blue hair who is running with a bad crowd.  It’s all up to me.  I have total control over your imaginary friends.  That gives me a whole lot of power you didn’t know I had.

So, go ahead. Talk on your phone in public.  I really like your friends.