Yesterday I walked along a street in which the trees have been pruned to clear the way for the power lines. As time has gone by, the trees have grown bigger and the trees’ branches have spread further apart. It doesn’t take much of a stretch of the […] 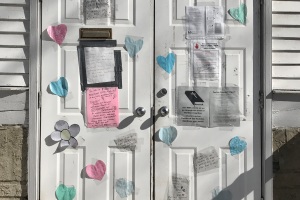 Norwood Wesleyan Church in Edmonton is closed for the duration of the COVID-19 lockdown, but the members have chosen to send a message to the community in the meantime. In fact, they sent several messages and put them on the main doors. The first thing I noticed was […] 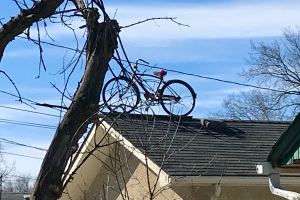 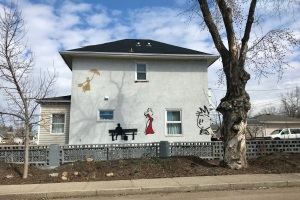 In my neighbourhood, there is a house with images painted on one of the side walls. All of the images are derived from popular culture and all have been carefully drawn and painted. At the top is Mary Poppins flying away with her umbrella. At the bottom is […]

Ada Boulevard in Edmonton’s Highlands neighbourhood is a popular place for walking and jogging. The area was developed over a hundred years ago and has beautiful houses all along the north side of the road. It is also the location of Concordia University, the McGrath Mansion, and the […]

There Is A Story Here

A house that had previously escaped my notice called to me today. I was actually looking for interesting doors to add to the Thursday Doors collection of Norm 2.0. When I saw this one, though, I wasn’t sure if it would be appropriate for that setting because it isn’t […] 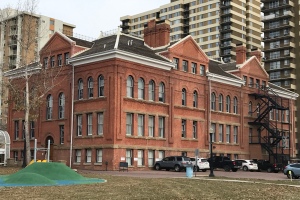 McKay Avenue School in Edmonton was in use as a school until 1983 when it was turned into an archive and museum for the Edmonton Public School Board. It was built in 1905 and originally served to house the Alberta Legislature after Alberta first became a Canadian province. […] 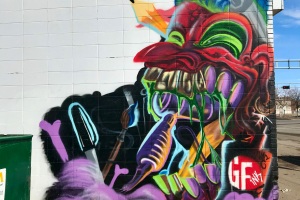 Muralist vs Graffitist vs Tagger

Good murals add colour and interest to an inner-city neighbourhood. I admire the designs and appreciate the amount of work that goes into creating them. It doesn’t matter what city I find myself in, I always come across murals that draw my attention and engage my thoughts. A […] 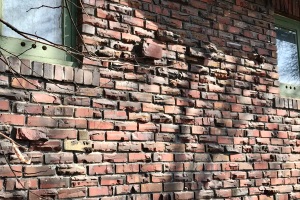 Clinkers are bricks that have been over-fired and have become misshapen. Clinker bricks used to be discarded by Edmonton brickyards but the owner of a hardware store saw value in them. In 1927 he used them to build his house. James Rutherford built a house eight short blocks […] 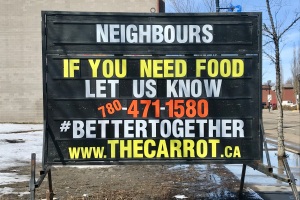 My Friday walk around the neighbourhood brought a few messages to my attention. I saw these on 118 Avenue and they provided heartwarming messages of solidarity in a time of crisis.

In December 2019, my niece and I enjoyed a tour of adobe buildings in Monterey, California. The first building we saw was the Royal Presidio Chapel of San Carlos Cathedral. It was early evening and the light from inside the chapel was warm and welcoming. The exterior of […]

When not looking at my feet and trying to avoid ice today, I saw some sights that made me smile including some balloons, a snowman with an icicle crown, a garbage can eating a spider, and a very Canadian mitten. After being in quarantine for two weeks and […]

A week before I left California I enjoyed another walk with my sister around Lake Cunningham in San Jose. There are lots of different birds, ducks, and geese living on and around the lake, and I cannot identify them all, but I have done my best here as […]

In September 2016 I enjoyed a wonderful visit to New York with my younger son and his partner. We went to some great shows and saw many memorable sights.  Among them was the building at 30 Rockefeller Plaza. It is home to the NBC studios where Saturday Night […]

For all of you who are housebound, watching too much TV, and wishing you had something to do, I have a remedy. I have a mystery for you to solve. Yesterday as I was out walking around my neighbourhood and keeping the required two metres from other people, […]

The Third Time’s A Charm

It took three attempts, but I finally got my online request for a refund from Air Canada to be accepted into their system. The first two times, that little wheel kept turning backwards and finally kicked me out. The third time, though, I got through and felt as […] 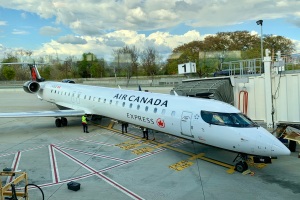 My Country Called Me Home

As I was telling him the saga of my need to return to Canada before the border closed, my cab driver from Edmonton airport to my house said, “Your country called you home.” I thought that was a pleasing way to think of it. I had originally planned […] 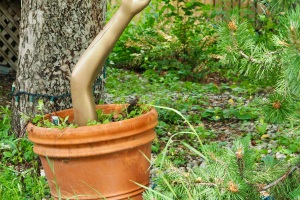 The building that houses Catholic Charities of Santa Clara has a magnificent main door on E. San Fernando Street in San Jose. This door does not get a lot of use, however. Most of the people coming and going from the building use a door at the side, […]