It is hard to say whether this giant aluminum baseball bat is a symbol of Edmonton’s optimism or its nostalgia. Either way, it is big. For a long time, it was the biggest baseball bat in Canada, but a few years ago they built a bigger one in Saskatchewan.

When it was created in 2001 it was part of the city’s effort to raise the profile of the area. It is on 118th Avenue which was originally known as Alberta Avenue. They changed the name to a number when the city came up with a grid system for the streets in 1914. Then, at the same time that the bat was installed in 2001, they gave the road the label “Avenue of Champions.” 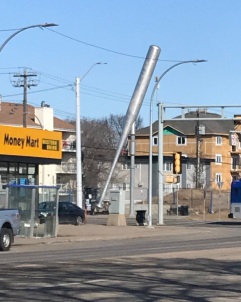 118th Avenue runs east to west across the city and its two halves are separated by the land once occupied by the City Centre Airport. The land is still there, but it is no longer an airport. The baseball bat is on the portion of the road where it intersects with 97th Street, a busy six-lane commuter road.

As a location for a roadside attraction, it is awful. There is nowhere for cars to stop and you have to be pretty determined if you want to take a picture. In most corners of the intersection, the view is blocked by street lights and power cables. 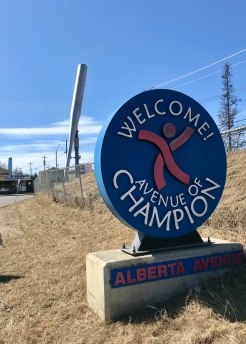 While I was out walking today, I decided to get to the corner that houses the baseball bat in order to take a decent picture of it. I have lived here for six years and passed this sculpture a million times, but this is the first time I have bothered to get close to it.

I am glad I did because otherwise I would not have known that it spins. I went up to the retaining wall that is beside it looking for a plaque or some other sign indicating who put the bat there and why. I didn’t see one, so I asked the man who was seated on the bench if there was one. He said there isn’t a plaque but there may have once been one, he wasn’t sure. He said with a shrug, “There’s a lot of vandalism around here.” 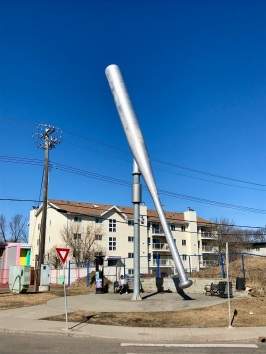 I thanked him, and as I was leaving he said: “Most people who come here want to make it turn.” I looked bewildered so he explained that the bat is designed to spin around on its anchor post. Intrigued, I had to give it a try and, sure enough, it spins!

When I got home I did a little online research and I discovered that Edmonton has the longest baseball history in Canada. It had its first team in 1880 and there have been several teams associated with various leagues since then. The last team suspended operations in 2012.

At the eastern end of the Avenue of Champions is the Northlands Coliseum (aka Edmonton Coliseum, Skyreach Centre, and Rexall Place) which was home to the Edmonton Oilers hockey team until 2016. So at two extremities of this part of 118th Avenue there are symbols of former sporting achievements, but I noticed with amusement that the sign on 97th Street refers to the Avenue of Champion. Just one. My guess is that they were thinking of Wayne Gretsky.

It seems as though the giant baseball bat has lost its significance, but its peculiarity is part of its charm. It ties together sport, history, sculpture, traffic, and revolution. What more could a city ask for?