Inertia:  1) a tendency to do nothing or remain unchanged

2) a property of matter by which it continues in its existing state of rest or uniform motion in a straight line unless that state is changed by an external force. (via Lexico)

When I first began my 14 days of quarantine after arriving back in Canada from the United States, I thought I would use my time productively. I would:

I spent a ridiculous amount of time trying to figure out why I couldn’t make my Chromecast project videos from my Macbook to my TV before I discovered that it was impossible. I also, simultaneously, discovered that the video portion of Amazon Prime that I just bought won’t work on my TV setup, either. I think I’ve been conned into a deal from which I will never get my money’s worth. 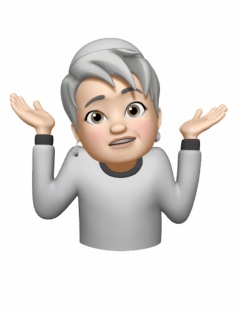 Another technical mystery is that I can text my eldest son from my laptop when I am in the US and using my American phone, but when I am in Canada and using my Canadian phone I can only message him from the phone itself, not the laptop. My younger son gets messages from either device, but not the elder son. Messages just don’t get through. I did spend a while trying to figure that out but then inertia set in.

I did, however, create my own personal emoji for when I message friends and family. My American roommate thinks it is perfect. I’m not so sure. The people who create those things don’t seem to have any 70-year-old faces in their inventory. Only 16-year-olds.

I haven’t done much in the last couple of weeks. The dent in my couch cushions has gotten deeper, and the bathroom is cleaner, but otherwise, I have mostly been successful in practicing inertia.

Tomorrow I will be able to go outside again for the first time and I’m looking forward to going for a walk. I will also be able to actually spend time with my family upstairs. Woo hoo! That will be lovely.

What is fascinating to me now, though, is the reminder that having lots of time isn’t enough to get things done. I also need an external force to get me doing something productive.

If you need an external prompt to read something, I heartily recommend the Louise Penny series of Inspector Gamache murder mysteries. I am also two-thirds of the way through The Witch Elm and it is absolutely brilliant; a page-turner.

If you feel your backside sinking into your couch, you could use my suggestions to stimulate your brain and order a book by one or both of these authors. Some independent bookstores are taking orders online. You can thank me later. If you feel like it. There’s no rush.