This morning was the perfect day to visit the archeological site at Tulum where there are the ruins of an ancient Mayan city. It was walled to the west and faced the Caribbean Sea to the east.

The site was inhabited as early as 564 A.D. and remained occupied until the end of the 16th century. That is when diseases brought by the Spanish killed most of the population.

The city was built to be a fortress and as our delightful guide, Gabriel, pointed out, the people spent a long, long time looking out to sea and thinking. One of the things they thought about was the movement of the sun. The Temple of the Frescoes was used as an observatory for tracking the sun and one window-shaped opening in a wall of The Castillo is placed precisely so that the sun shines through it at the vernal equinox.

It is an area surrounded by jungle, complete with monkeys, snakes, and iguanas.

The nearby town has developed to cater to the needs of tourists and there are plenty of places to eat, drink, and buy mementos. 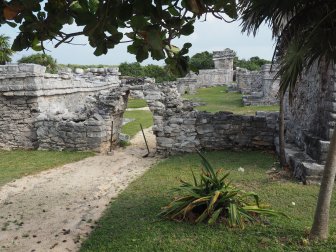 The temperature here got up to about 85 F (30C) today, which is about as high as I can go before I need to find air conditioning. We arrived early enough to enjoy cooler temperatures during the morning, which we needed in order to walk comfortably around the site in the sunshine. By noon, though, we were ready for lunch and shade. 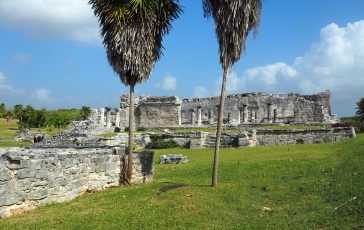 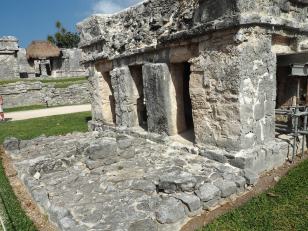 Our transportation to and from Tulum was in colectivos, or 15-seater public minibusses. That was a bit of an adventure in itself, and we actually missed our stop on the way out there, but the driver kindly retraced the route for us for a small fee.

All-in-all it was a great day out and I recommend the location, the guide service (well worth the cost), and the transportation. If you go, take a hat, sunscreen, and bug spray. Oh, and your camera, of course.