On Saturday I was flying from Edmonton to San Jose via Seattle. The first flight was without incident aside from some turbulence. When I arrived in Seattle I had plenty of time to catch my second flight which my boarding pass told me was at gate N18. I had been forewarned that Sea-Tac airport was undergoing some redevelopment but it wasn’t likely to affect me. Or so I thought. In full confidence, I began my walk to N18 which it took me through C section and D section and on an airport tram. 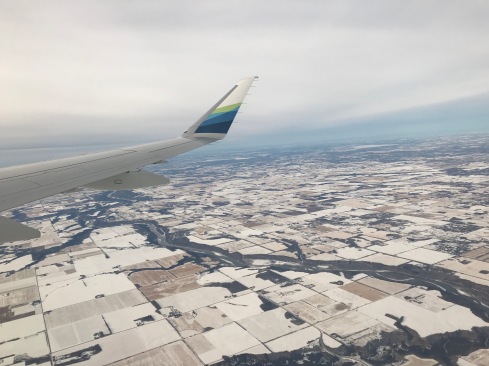 Then, arriving with smug certainty at N18 I discovered that my departure gate had been changed to C11. OK then. No longer smug, I retraced my steps to the tram which repeatedly informed me that the station at C section was no longer in use. I had to go to D section and then walk to C section. “Thank goodness I wore my walking shoes,” I thought.

Once seated at the appropriate gate for my flight, I did what many of us now do in airports. I listened to podcasts on my phone and checked my Twitter feed. The waiting area was full and we all watched as the plane arrived at our gate and disgorged its passengers. We knew there would be a wait while they cleaned the plane and loaded the luggage, so that was fine.

Then, we waited long past the time when we were due to board. Then we waited some more. Eventually, one of the desk agents went on the PA system to tell us there was a problem with one of the wheels and it was being replaced. I commented to my seat neighbour that I was glad they were fixing it. I’d rather wait for a new wheel than take off with a bad one. She agreed. 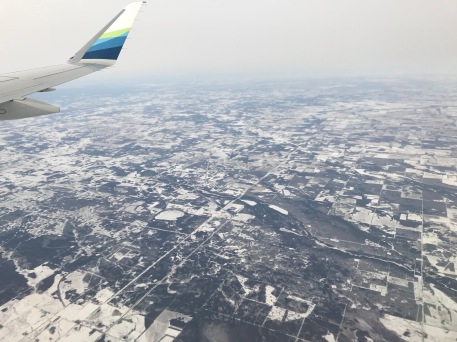 We got chatting and she told me she had lost her neck cushion. A porter had brought her to the gate in a wheelchair and she thought she may have left the cushion on the seat. She seemed to decide it was a lost cause and didn’t take the matter any further.

Then the desk agent announced that there was an issue with the plane’s fuel that would take a little while longer. By this time, the plane is starting to sound a bit dodgy. As I looked around I realized that there were three wheelchair-users in our party in addition to my seat neighbour.

About twenty minutes later, another agent came on the PA system to tell us that there was a problem with the plane’s toilets “on the ground,” whatever that means. She recommended that we use the washrooms in the terminal before boarding. At this point, I was debating the wisdom of taking this flight. I also realized that my seat neighbour was wearing a hearing aid and I checked to make sure she had heard the instruction. It is never easy to hear announcements in airports because the ambient sound is distracting and because there are duelling PA systems. Anyway, she assured me she had heard it and she took the opportunity to find the toilets. She could walk, she said, but not far.

Some time later, the agent announced that we would be using a different plane but that it was departing from a different gate in a different section of the airport: N11. Because of my previous experience in reaching N section I asked my new friend if she realized how far away it was. She didn’t, so I recommended that she request another wheelchair and a porter. She said she thought she could walk it, but I repeated that I thought it might be too far, so she approached the desk to ask for help. She was reluctant, though, because she said they looked really busy. I left her to it.

The rest of us got up and started walking through, first D section, then C section, then the tram, and ultimately N section. En route, though, the airport announcers informed us that the gate had been changed to one in B section. Then, a couple of minutes later it was changed again to one in D section.

I was walking beside a man with a wheelchair and I checked to see if he and I had both heard the same thing. B and D sound a lot alike on a tannoy. This man had been seated in the wheelchair back in our original waiting area, and his porter had long since left. I asked him if he needed any help and he told me that he thought he would be all right so long as he had something to hold on to. So, the man was pushing his own wheelchair. 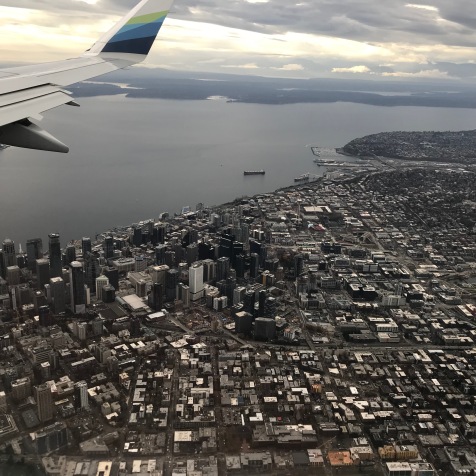 As we walked, there was yet one more announcement. Our departure gate was going to be in C section. In the meantime, the fast walkers were already way ahead of us and on the tram. When I arrived at the C gate I was reassured by the woman at the desk that I was, indeed, in the right place. I found a seat and after several minutes of waiting, I heard a man complaining to the desk clerk that he had gone all the way to the N gate, which we had first been told to go to, before being redirected. I wondered what had happened to my former seat neighbour, but I never did see her again.

After getting on the plane, we waited a long time for stray passengers to be rounded up. Not surprisingly, several of us had gone to the wrong gates. After we took off, I noticed that there were many empty seats even though the original flight had been full.

When everything goes according to plan, airports are very efficient. In this instance, though, when a change in schedule happened, they were really inefficient. They didn’t effectively accommodate people who had mobility issues, and they were hopeless when it came to mass communications.

If airlines had a scale that you had to stand beside to determine your ability to fly, like the fairground signs that say “You must be this tall to ride,” lots of us would not meet the necessary degree of fitness. The experience on Saturday made life almost impossible for some of my co-travellers who were wheelchair users and pushed some parents of infants to the breaking point.

If the whole airline/airport system would re-focus its standards so that meeting the needs of the most vulnerable travellers became a much higher priority, they might find themselves with many more passengers.