Inner City Living Is Not Bad

Recently, the CBC came up with a five-part podcast series about the neighbourhood in which I live. It was focussed on a few slum landlords and one in particular who has been responsible for a lot of community problems. CBC was right to draw attention to this, but I was really disappointed by the implication that the whole inner city is plagued by drug houses and associated wrong-doing. They called the series Slum Town and that set the tone; it was a deliberately inflammatory and deceptive title.

The districts being described are actually inhabited by a lot of good people who work hard, maintain their property, and help each other out. There are a few empty stores and abandoned lots, but those are steadily being occupied and improved. New houses are replacing 100-year-old houses that were beyond repair. New stores are being built and new businesses are meeting local needs.

There are some typical inner-city problems, but those problems are rarely apparent, especially in the daytime. Of course, there is some prostitution, theft, and drug dealing, particularly at night. We have had some bikes stolen from our shed, a package stolen from the front porch, and items taken from an unlocked car. Since then, we have learned to be more cautious about locking things up and we try to reduce the likelihood of crimes of opportunity. 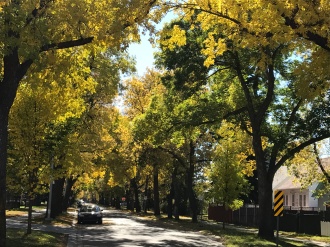 We have bought a home security system that allows us to monitor activity around our house because, in the words of my daughter-in-law, we don’t want to feel like potential victims. Locking up the house and cars at night is no more than most people do in urban areas. It just makes sense.

Some problem houses certainly exist, but they do not detract from the beautiful tree-lined streets and the friendly neighbours. The people who live across the alley from our house came to the door to let us know we had left the garage door open. The people next door came to let us know when cars were being ticketed and towed for not having residential parking permits. We all take misdelivered mail to its rightful owners, and we all make sure our sidewalks are cleared in the winter.

I walk, alone, several times a week in a one-mile or so radius from my house. I enjoy admiring some of the well-tended yards and interesting new developments. I also see some quirky things and oddities that I sometimes use as inspiration for blog posts. In all my walks, I have never felt unsafe.

So, CBC, as good as your podcasts were, they completely missed the real atmosphere here. Far from being a slum town, this is a friendly area with some of the city’s oldest and newest homes. The people who live here come from all sorts of interesting places and have chosen to live here to work and raise their families. A few drug houses are nuisances that need to be dealt with, but they absolutely do not define Edmonton’s inner-city neighbourhoods.