I saw something odd today and I thought I would see if you can make sense of it for me.

On a sidewalk bench near my home, there was a painting on stretched canvas next to a discarded yellow safety vest. I wondered how they got there and decided that there are a few possibilities.

In the next block to the bench is a thrift store, and people sometimes leave donations outside the receiving door. I often see clothes that have been taken out of donation bags during the night and discarded. It is possible that the vest was taken from there and dumped on the bench.

Or, perhaps the vest belonged to a worker who got sick of the job and ran away, tossing off the vest as he or she scarpered down the street.

Or, maybe the vest belonged to a French protester who was suddenly deported to Canada while still wearing the vest.

A few blocks away is the Nina Haggerty Centre for the Arts, where they regularly hold painting classes. There is a good possibility that someone created the picture there and accidentally left it on the bench.

Or, maybe someone stole it and then felt bad about having done so. The thief then left it clearly visible on the bench so that its owner could recover it.

Or, perhaps the artist donated it to the community as a gift, much like the gifts of books that people leave in public places.

I thought the painting had been carefully executed but I don’t really know who is represented in it. It looks like a soldier, or possibly a character from an action movie or video game. 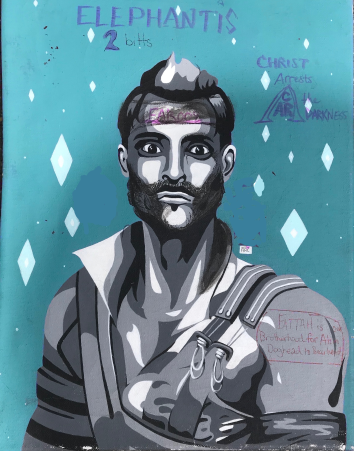 What I found troubling was the writing that seems to have been added later. None of it makes sense to me.  I have blurred out some offensive symbols but have left the writing. If any of it is offensive, please tell me and I will blur it out of my photo, too.

The writing includes the words Elephantis. 2 bitts. Christ arrests the darkness. A symbol including the letters CAR. FATTAH is our Brotherhood for Ah n Doghead to Bairhead. FAROOL.

I Googled Elephantis and found that he was a Greek poet, and Elephantis is also a hardcore band in England. Fattah is one of the names for God and it means Victory Giver. It is also a dish from the southern Levant with bread as its base. Ah n might have been intended to read Allah, but I’m guessing. Doghead could refer to a human with a dog’s head. Bairhead might refer to Barrhead which is a town in Alberta. FAROOL just makes no sense at all. Maybe I read it incorrectly.

So, basically, the whole thing is a mystery. Why would the vest or the painting be on a bench in Edmonton? And, why would someone add words that seem to be in a code that only the initiated can read? Any and all suggestions for understanding, or failing that, wildly imaginative interpretations, will be appreciated.