In my ongoing quest to solve my years-long struggle with insomnia, this week I started using CBD* oil. For two nights now, it has provided a marked improvement in the depth and length of my sleep.

CBD oil was recommended to me a couple of times and, most recently, by fellow blogger Lael-Heart. She used a CBD spray, so that is what I asked for when I visited a local cannabis store.** The store I went to did not stock the same brand that Lael-Heart used, and it did not have a CBD oil in spray form. The woman behind the counter recommended instead an oil which came with a dropper and had a THC content of <0.5 mg/ml and CBD of <9.93 mg/ml. 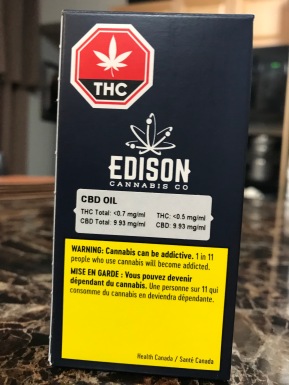 I asked if this would help cure insomnia and she said that she was not able to provide medical advice. This makes sense, and I’m sure she was abiding by the rules of the store’s distribution license, but it would have been nice to have some reassurance. I had no idea what the content levels meant in terms of their effect, and some hints would have helped.

The clerk did point to another product with a much higher THC content, but as I was trying the product for the first time, I wanted to be cautious. Also, I was not interested in its recreational properties, so I thought I would see the effects on my sleep of the oil she first recommended. I paid $47.24 Cdn for a plastic bottle the size of an eye- or ear-drops container. 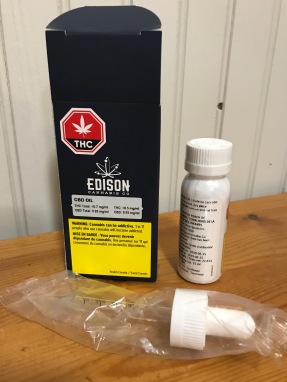 When I got the bottle home I was keen to try it out but discovered that neither the bottle nor the box it came in gave me an idea of exactly how much of the oil to administer. I went to several websites online to try to figure it out, but the information I found was a little confusing. First, it seems that the amount you use is determined by your weight and body type, but the charts I looked at didn’t all agree on how much was appropriate for me. Second, some articles talked about measurements in terms of mg and some in terms of ml. It turns out they are basically the same thing, but it took me a while to figure that out.

In the end, I determined that a complete dropper-full was probably too much, so I decided that the .50 ml mark on the dropper was probably a good place to start. The first night I actually used slightly more than that, possibly .60 ml. 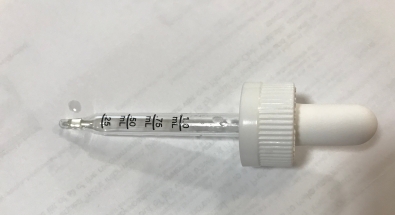 My first reaction was that it tastes awful! Really, really disgustingly bad. As I was lying in bed waiting to feel some sort of effect from the CBD, I was mostly concerned with the skunky taste in my mouth. Fortunately, I had some cough candy in the drawer of my nightstand, and that helped to solve the problem.

When I woke in the morning I felt really well-slept. Even though I had woken up a few times in the night, each time I had fallen back to sleep right away, and altogether I had slept for over seven hours! I had much more energy than I normally have after my usual broken sleep.

The second night I thought I would see what happened if I had slightly less CBD oil, and I drew about .40 ml into the dropper. Before going to bed, I had read that one should hold the oil under the tongue for at least thirty seconds before swallowing, and so that is what I did. This seemed to mitigate the problem of the nasty taste, and I am speculating that is because the oil was mixed with saliva. It is also possible that the first night I had put some of the oil on top of my tongue instead of under it. Whatever the reason, it didn’t taste so bad.

That night I slept soundly for over six hours before needing to go to the bathroom. This interrupted my sleep so much that I woke up more-or-less completely and went online for a couple of hours. Then, I went back to sleep for a couple more hours, so altogether I got more than eight hours of sleep, which felt right for me.

I will keep tracking the amount of CBD oil I use and the number of hours sleep I get for a few more days to see if the improvement is maintained. I am also still using the weighted blanket I mentioned in a previous post, but the weather has sometimes been too hot to use it. While I don’t have enough information to make a recommendation on either the blanket or the CBD oil, I hope my experience will be useful to those of you looking at ways to improve your sleep.

* CBD is an abbreviation of cannabidiol, which is found in the cannabis plant. THC stands for tetrahydrocannabinol which is the component in marijuana that is responsible for its psychological effects.

** The sale of cannabis has been legalized and regulated in Canada since October 2018 and in April 2019 there were 101 licensed stores in Alberta.