When I started this blog I had the idea that I wanted to write a book but needed to start with smaller writing projects. Snowbird of Paradise has been a good place for me to gain some writing practice, and I find that I like writing blog-size pieces about my life.

The book I wanted to write was about my husband’s illness. Geoff first became ill in November 1998 and he went through a couple of misdiagnoses before eventually being notified he had Thymoma. Then he went through chemotherapy, radiation therapy, and surgery. He was ill for nearly eight years before he died, and in that time our two children grew through their teenage years and left home.

I was his primary caregiver and, aside from a few weeks’ leave of absence, I continued to work full time. Even though Geoff tried hard not to cause any more trouble than necessary, it was a very difficult time for all of us. There were times when we were not our best selves.

We were facing ongoing interactions with the medical world, many of which were bewildering and confusing, so I kept lots of notes. I also did a bit of research in the library and online. I wanted to be able to report back to family in the U.K. and to talk things over with Geoff and our children, and I wanted to get the facts straight.

I also wanted Geoff to keep in touch with his Dad and sisters, so I kept a lot of the emails that went back and forth. At key times in the process, Geoff received lots of cards and letters of goodwill, and I kept those, too. 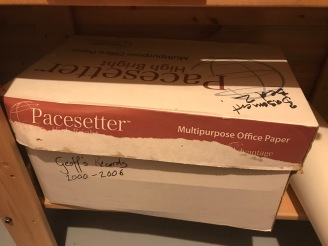 After Geoff died in September 2006, I couldn’t bring myself to throw all those things away, so I put them in a box. Later, I thought the material would be a good foundation for a book, and the book would be a good way for me to get through what was, effectively, post-traumatic stress. I thought that if I wrote about the experiences, feelings, and difficulties, I could put it all behind me.

It is now almost twenty years since Geoff first became ill, and I still have that box of related documents. It’s in my furnace room on a shelf, waiting for me to do something with it. The trouble is that so much time has passed I don’t know if I can’t accurately remember how it all evolved. I also don’t know if I want to dredge up all those feelings.

On the other hand, it might be cathartic. It might even, in the best case scenario, be a book that would be helpful to other caregivers.

Today, I thought I would bring that box out and just shred everything. I wouldn’t read any of it. Just shred it all. If I stopped to read any of it before shredding I would only be upsetting myself to no purpose. But, I didn’t get the box out from the furnace room. I’m still conflicted about it all.

So, I’m leaving it up to you, dear reader. Here is a simple poll asking you what you think I should do. Thank you for giving this some thought.