The city of Edmonton has a lot of construction going on right now. Roads are being repaired, buildings are going up, a new train line is being installed underground, and City Hall is getting a new wading pool. 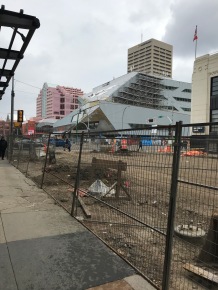 As I stood in the middle of Churchill Square I realized that there was some sort of construction going on in every direction. It’s as though all these workers were just waiting, tools in hand, for the snow to go. Then they all leaped into action at once. It’s a bit noisy but also very encouraging because it represents growth and change.

One of the things that the city has done is to install an interactive Happy Wall which is intended to block from view the work going on in front of City Hall and, at the same time, to provide some amusement.

On the wall, passers-by can write, by opening up small hinged wooden rectangles, their own brief message in blocks of color. Last year I photographed a young couple who had just got engaged and had written “PAIGE + STEFAN” on the wall. They asked me to take their picture in front of it and I was happy to record their smiles. 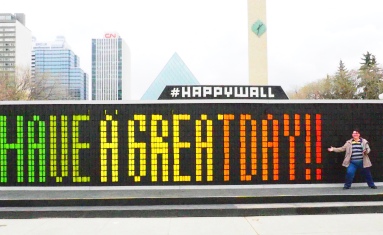 Today, as my son and I approached the wall, we could see that someone had written: “REPENT THE ENI”. Presumably, they had intended to write “Repent. The End is Nigh” but they ran out of space on the wall. Forward-planning must not be their forte. I didn’t take a picture of that message so you will have to take my word for it.

We decided that the message should be more uplifting, and we replaced that message with “HAVE A GREAT DAY!!” It took a while to close up the old message and open our own, but it was worth it. Several people who passed by gave us a smile, so it’s working already.

You can repent the eni if you want to, but we hope you have a great day doing it.