Question: When is the NRA not the NRA?

Answer: When it is the other NRA.

I will explain, but first here is a little backstory. My oldest son has had a very wide-ranging career path and, in the process, has taken up a number of side-gigs. His latest is related to his passion for pulp magazines from the 1930s, ‘40s, and ‘50s. He is a fan of the writers of old detective stories, tales of the macabre, and mysteries of all kinds. He is also appreciative of the skills of the graphic artists who illustrated those magazines. 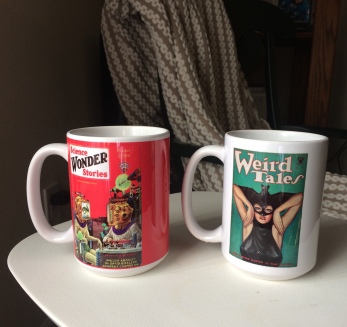 This interest in pulp fiction has recently led him to start up an Etsy store selling products featuring public domain images from those publications. It’s a brand-new venture, so at present, there are just a few items on display, but I am assured there are more to come.

His store, referencing his writing skill, is called Words By Ken and I did not hesitate to order a couple of items as soon as I learned about it. I found all the images appealing and chose a couple that I liked for coffee mugs. They arrived yesterday.

After I had unpacked the box, I thought it wise to wash the mugs before using them and so I put them in the dishwasher. A couple of hours later my roommate came home and noticed them. She took a look at the Bat Lady mug and asked: “Why is there an NRA logo on it?” I took a close look and realized with dismay that there did, in fact, appear to be an NRA logo in the top right corner of the image. It had a silhouette of an eagle and the letters NRA boldly displayed above it. I did not have an answer for my friend.

I then opened my laptop and asked Google to figure it out for me, but it wasn’t as simple as I expected. Every time I asked Google for something related to the NRA and Weird Tales it took me to sites that, although interesting in awful ways, did not answer my question. They all talked about gun groups and strange stories, but not the stories I was interested in.

In the process, I also read a lot about the development of the Weird Tales magazine and how it had gone through changes in authorship and ownership, and I found that they had experienced some serious financial difficulties at various times. So, of course, I reasoned that they must have needed the NRA for funding at some point.

As someone who is not pro-gun and is actually terrified of all things weapon-related, this did not sit well with me. I didn’t really want an NRA-sponsored mug in my kitchen cupboard, but I did want to support my son in his new venture. What is a mother to do?

Ultimately, I made a search using the image of the eagle logo itself and, lo and behold, I had a completely different answer. It turns out that both the National Rifle Association and the National Recovery Administration have, or had, the same initials and the image of an eagle with its wings widespread. Their purposes, however, could not be more different. It is the latter of these two that is depicted on the cover of Weird Tales. The magazine was showing its support for improved labor practices.

The National Recovery Administration was formed in 1933 as a part of the New Deal established by Franklin D. Roosevelt to create codes of fair competition for industry, labor, and government. “The codes were intended to reduce “destructive competition” and to help workers by setting minimum wages and maximum weekly hours, as well as minimum prices at which products could be sold.”

So, one NRA promotes fair competition, and the other does quite the opposite. I have to admit that I breathed a sigh of relief when I realized which one was represented on my mug.

Now I just have to explain the difference to the next person who asks. But, that’s OK. I do my part.