Outside the San Jose Repertory Theatre is the Oionos sculpture by Douglas Hollis and I must have passed it a hundred times.  It was only today that I realized that the writing on it is not designed to be read by humans; at least, not humans on the ground.

The writing can only be read aright from above, so it must have been designed to inspire the gods, or aliens, or people in planes passing overhead. 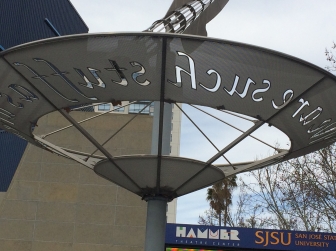 Interestingly, Alexander Graham Bell named one of his kites Oionos. It means “bird of omen.”