Anarchy On The Big Screen: My Review of Fahrenheit 11/9

If you have seen Michael Moore’s movie Fahrenheit 11/9 you will know what I mean when I say it is haunting. I saw it yesterday and am still feeling the aftereffects. 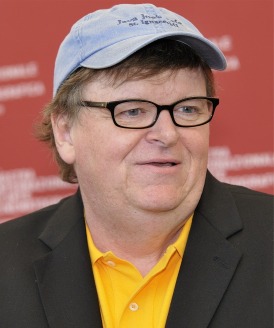 First of all, Fahrenheit 11/9 has all the earmarks of other films I have seen by Michael Moore. It is political, it is angry, it is emotionally draining, and it uses interviews and archived film editing to great effect. It brings to light a lot of important issues, and it engages the audience both emotionally and intellectually.

He goes after the American election process, both political parties, corrupt voting procedures, corrupt leaders, greedy business owners, bad decisions . . . you name it. Not much escapes his fury at the perceived reasons for the current state of affairs. The only people who seem to garner his approval are workers who organize to fight injustices and survivors of school gun violence who organize to change gun laws. Everyone and everything else gets savaged.

It’s as though he wants to blow it all up in an attempt to change the system. This is, I suppose, what an anarchist filmmaker might be expected to do, but when you see it on the screen the dismay and disorientation you feel are profound. Even worse, there is no solution given to us as a means of salvation. On the contrary, we are told that hope is the wrong emotion to have. Hope blinds us to the evil before us. Hope shields us from the righteous anger we ought to feel. He might be right but damn that’s depressing.

More than that, though, I was disappointed that he chose some cheesy techniques to get us worked up. The first I noted was the overly dramatic use of music to heighten the likelihood that we would agree with his interpretation of events. On some occasions, this was so overdone that I laughed out loud. 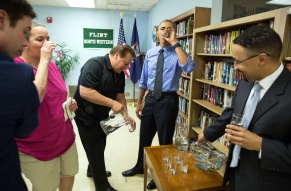 Inserted into the middle of the jumble of political issues was a film-within-a-film about the water crisis in Flint, Michigan. I know this is a topic close to Moore’s heart and it is one that needs urgent attention. It seemed, though, to be an aside in a film about national political concerns. I wished he had chosen to make a separate film about just this issue instead of trying to jam it into this one.

I knew that he would be critical of the Republican party, but he surprised me by negatively portraying the Democratic party and Obama, too. In fact, I learned some things about them that really changed my perceptions. It hurts to have one’s bubble burst, but it’s not a bad thing to be faced with truths that have evaded you.

And yet, in spite of all that, I think you should see it.  It’s an imperfect movie, and it isn’t going to make you feel good, but it will allow you to see some things that you weren’t aware of, and it will force you to reconsider some of your assumptions.

When I left the theatre, a man behind me on the escalator asked me what I thought of the film. I told him that my heart was racing. He said that he had cried several times while watching it. I then said that I learned things about Obama that I never knew before. He asked if I was American and I explained that I was not but that I visited there every winter. As he walked away he said “I am an American. Sadly.”