If You Don’t Mind, It Doesn’t Matter

When is a good time to stop colouring your hair?  It’s not a trick question, even though it sounds a lot like “Have you stopped beating your wife yet?”  You could answer that you shouldn’t even have started colouring your hair, but it’s too late for many of us. We already did. 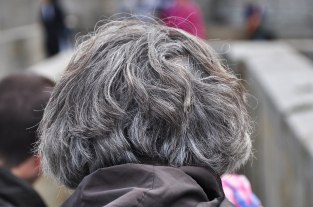 Once you start colouring your hair, it is almost inevitable that you will continue because that tell-tale line of grey shows through at the scalp as the hair grows. When you look in the mirror, that is all you can see, and so you rush out to buy more hair dye or you rush to the phone to make an appointment with your hairdresser. It’s a bit like playing a video game that keeps you hooked because you never quite get through all the challenges.

The silly thing is that when you get to a venerable age, no-one is fooled. Everyone knows that your hair is not its natural colour, but in the end it’s not really about what other people think. It’s about how you see yourself and how you feel about becoming grey. Getting older is wonderful in many ways but getting greyer isn’t one of them. It’s the first step on the road to being treated as less-than, or stupider-than, until you ultimately become invisible. The distance between venerable and invisible is surprisingly short. 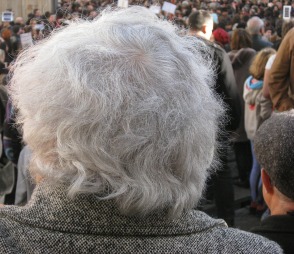 White Hair (from Jackmac34 via Pixabay)

Having been housebound for two-and-a-half months now, I was in dire need of a haircut, and so when I went for a medical appointment yesterday I took the opportunity afterwards to go to a nearby mall and get a haircut.  As I was chatting with the hairdresser I said that I wasn’t sure whether or not I wanted to let my dyed hair grow out. In the past when I have wondered this, hairdressers have always suggested that I would benefit from more colour.  This time, however, the lovely woman attending to me pointed out that the grey was now so dominant that I might as well let it take over. “You could just let it go grey and see how you like it,” she said. “If you don’t you can always colour it again.” So sensible. So obvious. So simple. I don’t know why I ever fussed about it before.

I sometimes see women who are much younger than me who are unrepentant in having a full head of grey hair, and I admire them. I wonder where they get the courage not to fake it, not to try to cling to their former youth and darker locks. Obviously, their sense of self does not depend upon trying to look younger than they are, but I have been caught up in that pop culture-generated worship of youthfulness that has informed my entire life. It’s time to put a stop to that nonsense. 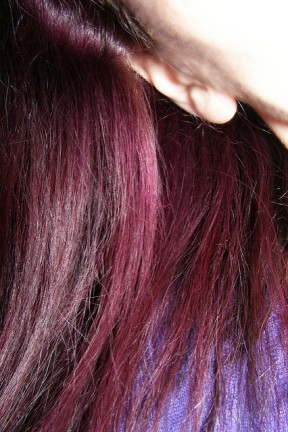 When I left my medical appointment, I stopped to chat with a woman who had been at the same clinic.  Her name is Sylvia and, although she appeared to be several years older than me, she had dyed her hair a surprising magenta red–nothing like any natural hair colour ever seen. It made me smile.

If you are going grey you have three choices: just let it go grey, dye it as close to your youthful hair colour as possible, or go wild and pick a non-hair colour. Your hair can say “I love me just the way I am,” or “I won’t be easily ignored,” or “Girls just wanna have fun,” or all three. It’s up to you.