When you go to a museum with old people, you don’t see artifacts, you see memories.

I had the pleasure of visiting the Innisfail Historical Village yesterday in the company of a busload of people on a summer outing from the North Edmonton Seniors Association. We had already spent the morning at a wildlife centre and it was a very hot day, so energy levels were low. Surprisingly, though, everyone perked up when we started to wander around the village. 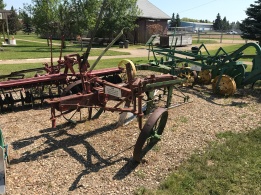 As we looked around the various buildings I overhead many people reflecting on childhood experiences. Some of the thoughts were of parents using old farm equipment or big round wringer-washers. One woman remembered when her father put a gas motor on the wash tub so that it would turn automatically. She chuckled when she recalled that then the tub had to go outside on the porch so that the house wouldn’t be filled with the smell of gasoline.

Another woman was startled to see a carriage just like the one her dad had used to go to town. It was horse-drawn, and sometimes he allowed her to ride along. She debated with her friend whether or not the carriage she remembered had one seat or two, and they decided that it probably had two but her dad might have taken one out. 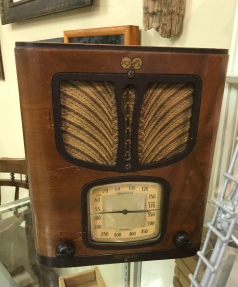 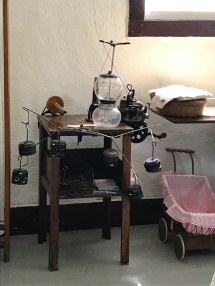 The participants remembered sitting in tiny school desks, reading from rag books, and sewing on a Singer treadle machine. They reflected on using the old train station waiting room, and listening to the wireless on winter evenings. 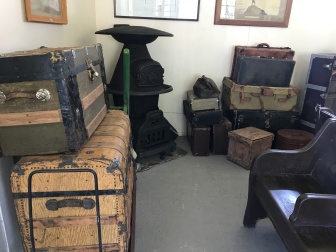 Occasionally, I heard someone say “I’ve still got one of those!” as they looked at various items in the houses, stores, and workplaces in the village.  I’m not sure if they were pleased or dismayed to realize that some of their possessions are considered historical. It was probably a bit of both.

It had been a wonderful day filled with both new experiences and old reflections. And, to top it off we all had delicious ice cream, which makes everyone think of fun moments when they were kids. When we got back on the bus to head home, we were all cheerfully tired and many of us had a little nap on the journey. I like to think we all dreamed of a happy and carefree childhood.