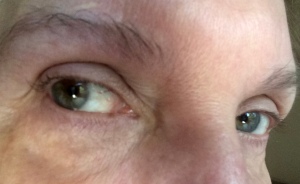 It happened again. Someone stopped me in the street and asked me what I use under my eyes. I’m starting to think my hard-earned wrinkles of experience are magnets for sales people with magic creams to sell.  The last time this happened, the magic was supposed to be from the Dead Sea.  This time, I don’t really know where it was from, but it had something to do with diamonds and was really, really expensive.

I was happily strolling with my son down the main street in Palo Alto on our first visit to the city. We were looking around, seeing what there was to see, and hoping to find somewhere good to eat lunch. Then, interrupting our thoughts and conversation, a lovely young woman offered me a sample of under-eye cream.  No, not cream—serum.  There’s a difference. My mistake was in taking it.  There is no such thing as a free sample of under-eye serum.

Once I had accepted the sample, I was drawn into the store, a strange discussion about my eyes, and an offer of a free eye treatment. I can’t exactly remember everything the saleswoman said, but I do remember her repeatedly asking me what lotions I used. When I said that I didn’t remember what I used or what I paid for it, she kept on asking. Apparently, this was important to her. My answers were clearly unsatisfactory, so she prompted me by guessing that I had paid $20. I said, “Okay. Maybe,” And that was enough to keep her going.

“Normally,” she said, “this serum costs over $600.” I laughed out loud. “But I can offer it to you for $298.” I shook my head.  My son shook his head, too. All the while, as I sat like a child on a high chair beside a makeup table, the lovely lady was patting liquids, lotions, and the magic serum below my right eye and chattering almost without ceasing. She told me it would make me look a lot younger. 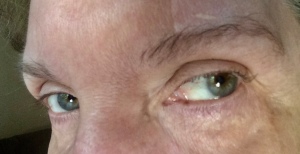 “Thanks,” I said, “but I really cannot afford it.” Undeterred, she then offered to include in the deal “at no extra charge” some additional face cream. When I continued to balk at the price she whispered conspiratorially. “People in Palo Alto, they have lots of money, so they can afford it.” The implication here was that she could tell I was from somewhere else, where people are less wealthy, so for me she could adjust the price.

I continued to say that I could not afford it and so she went to a computer to figure out how low she could go with the price.  When she came back to me she said that, just for me, she could offer the tiny container of under-eye serum and the huge jar of the other face cream at employee pricing of $200.  In addition, she would throw in a second huge jar of face cream.

When it became apparent that no matter how many jars of cream she added to the deal, I still could not afford it, she allowed the sales pitch to end. By now my right eye was feeling decidedly tight and a little uncomfortable. As we left the store she discretely handed her business card to me and promised that if I called her she would offer me the best possible deal.

My son and I were glad to have escaped with my money and most of my wrinkles intact. After about fifteen minutes, the under-eye serum became dry and irritating, and by the time we left the main street I had rubbed most of its powdery residue away.

And that’s how I learned to love my wrinkles and saved $600.