David Andrews, aka @davetheaxe, is angry. He is very frustrated because we don’t all know how to use traffic circles in Edmonton. He wants someone, anyone, to put up signs explaining how they should be used correctly, and he said so on #yegtraffic, the Twitter stream dedicated to angry Edmonton drivers.

Yo #YEG #yegtraffic put great big signs at #Trafficircles explains how to f***ing use them,#insidelanehastherightofway#outsidefirstexit

I understand his frustration because he has clearly studied this issue and makes sure that he always uses traffic circles correctly. As a relative newcomer to Edmonton, though, I see the problem somewhat differently.

The first dilemma for the uninitiated is in knowing whether you are approaching a traffic circle or a roundabout. Yes, folks, there is a difference. If you didn’t know better you would think they both looked the same. That’s why @davetheaxe has an advantage over the rest of us.  He knows which is which. This is important because sometimes you have to change lanes before entering the intersection, and sometimes you don’t. If it is a traffic circle and you are going straight or turning left, you enter the left lane. If it is a roundabout, you can stay in the right lane if that is where you find yourself, and exit wherever you need to.

The Alberta Transportation website calls the roundabout “modern,” but I doubt that anyone in England would consider roundabouts modern. Regardless, this would seem to indicate that these are the wave of the future in Edmonton, and that the traffic circle is on its way out. Thank goodness.

In the mean time, I must agree with @davetheaxe that clear signs would be beneficial. They should not be at the traffic circle itself, though. Rather, they should be about a block before the circle so that we can change lanes before we get there. Otherwise, we are going to treat them like roundabouts and annoy the heck out of dear old Dave.

Actually, rather than putting up signs, I’d prefer that they just told us to treat traffic circles and roundabouts in the same way. Then we can all get home without feeling the need to send a tweet to yegtraffic. Oh, and let’s stop calling them inside and outside lanes, please.  If we all agree that they are left and right lanes there will be no confusion for anyone, except  perhaps my roommate who doesn’t always know her right from her left.

I’m glad we got that sorted out. Now, who wants to call that song the Hokey Pokey?

A family member in the UK has drawn my attention to this “Magic Roundabout” in Swindon. Now I feel as though Edmontonians have nothing to complain about. 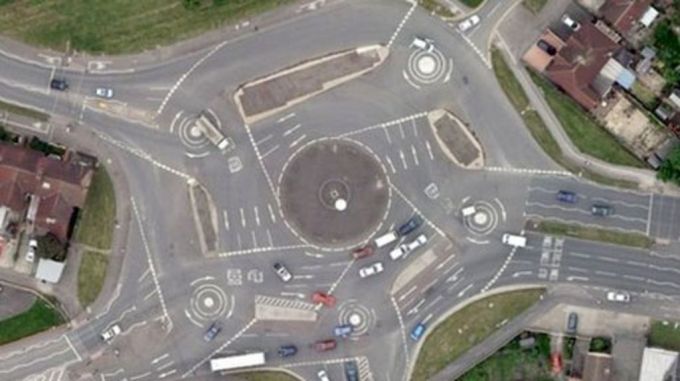