I have just come home after a fabulous week in which I saw three Broadway shows with my younger son, Jamie, and his partner; we saw Hamilton, The Humans, and Avenue Q.  All were wonderful, each for different reasons, but the most magical event was, of course, Hamilton. It has been a week since I saw it and I am still glowing. Not only have I experienced what may be the greatest show ever, but I have been transported back to my youth when one of the things we did on a rainy Sunday afternoon was sing along with great songs-from-the-shows. 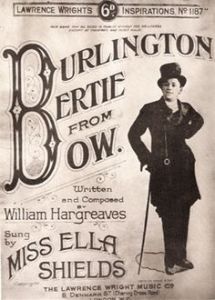 My parents had been fond of the music halls in London in their younger days, and they both knew lots of the songs from that era; Don’t Dilly Dally on the Way, Two lovely Black Eyes, Burlington Bertie from Bow, and so on. The lyrics deal with some really difficult issues including poverty and abuse, but somehow singing them helped to get through it all. Mum and Dad also sang some of the more recent popular songs that “everyone” knew, such as My Old Man’s a Dustman. Even though they never went to pubs, they could have joined in with any pub singalong. 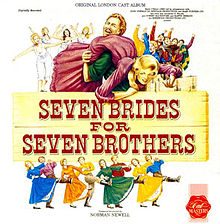 In my childhood home there would often be one or two of the family singing along to Mum’s LP’s of Seven Brides for Seven Brothers, The King and I, Kismet, South Pacific, and Oklahoma.  My siblings and I still know most of the words and will happily prove it to you at a moment’s notice. Some of us can even do the harmonies.

I didn’t start to go to live theatre until I was in mid-life, but when I did I was enchanted, especially with the musical shows. Now I think of theatre as one of the blessings of retirement. Fortunately, I have both the time and the money to go to at least a couple of shows a year, and sometimes I even go with one of my sisters! Such a treat. We come out of there with a spring in our steps, singing snippets of songs. We are in a little musical bubble that stays with us for a couple of days at least. The smiles last even longer.

This musical heritage seems to be in the DNA because both of my children are musicians and singers, and Jamie has even written and produced a very successful musical play for the Edmonton Fringe Theatre Festival. I don’t play an instrument myself, but my husband played guitar and encouraged our children’s musicianship. My contribution was mostly just taking them to piano lessons, so whatever it was that made that music gene kick in, I’m grateful.

For Christmas last year Jamie and his partner bought me those tickets to see Hamilton in New York, and I could not have been more thrilled.  We have a tradition of writing Christmas wish lists that include impossible dreams as well as regular wishes and dollar store bargains. On my wish list was the dream to see Hamilton but I never expected the dream to come true. A friend told me that the show was a game-changer, and she was right.  It is brilliant in many ways; musically, politically, socially, and historically. 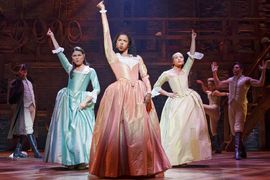 Musical theatre has the ability to transport us to a different time or place and then realize something about ourselves and our times that we hadn’t considered before.  It can make us laugh, think, cry, and dream. The music hall songs of my parents’ day provided a way to cope with all sorts of struggles and indignities and to somehow make the burden lighter. Similarly, Hamilton takes on conflicts and challenges in our world—race, class, gender, war, relationships—and reimagines them so that in spite of it all we come away singing “Look around, look around at how lucky we are to be alive right now.” That really is magic.

*The Schuyler Sisters lyrics and soundtrack