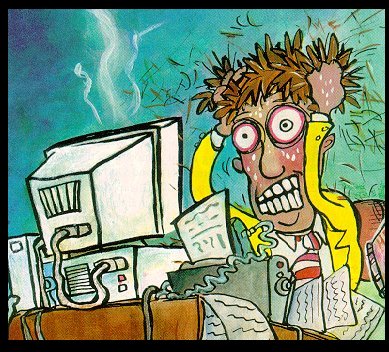 I have spent at least two hours trying to get my Quicken Cash Manager 2014 working again, to no avail.  Settle in, Intuit, because you need to hear this.

After shutting down the machine, counting to ten, and rebooting several tunes, I finally admitted that the problem was going to take more technical skill than that. I managed to connect with Google long enough to be able to find out how other people had solved this problem.  The recommendation was to basically turn back time, undo the Windows 10 download, and reload it.  I was assured that all my files would be saved.  OK, I said. I can do that.

So, I did.  It was a bit like chemotherapy for computers; it kills almost everything, but not the essentials.  Thankfully, it all reinvented itself nicely, and helpfully gave me a list of all the apps that needed to be reloaded.  Among these was Quicken.

You should know that Quicken has been a part of my life for a very long time now and has seen me through some very difficult times, so I have become quite attached to it.  It holds all my financial secrets, and thoughtfully organizes them into categories.  I can create charts and graphs showing me how much I spend on essentials and fripperies, and I can generate lists of expenses for the tax collector at the click of a button or two.

I was able to pull up my stored files with no trouble at all, but when I went to download data from my bank account, that’s when the trouble started.  It suddenly wanted me to re-register with Intuit. OK, I said. I can do that.  But, no. It wasn’t that simple.  I tried and failed over and over again to log in with my old password or with new passwords until it locked me out.  I went on the website to ensure that I had my account details right, and that only took a couple of attempts.  The problem is  that I then seemed to have two different accounts; one for the Intuit website and another for Quicken. Either way, I couldn’t solve my problem.

No worries, I said to myself. You can use your new MacBook. I’ll just download the program to the Mac.

Not so fast, young lady. It’s not that simple.  First of all you don’t get a free download when you change to a different computer. Second of all, Quicken for Mac is not available in Canada.  Even if I could get Quicken for Mac here (and I was willing to pay for it all over again by now), the US users tell me that it is not as good as the Windows version and brings several problems with it. So, I probably don’t want it on the new laptop. In addition, the US version doesn’t have many Canadian banks listed, but the website doesn’t tell me which ones they are. Interestingly, Amazon Canada lists Quicken as no longer available. That tells me a lot.

So, back to the Windows PC. I figured that I probably had to reset the link between the bank accounts and the software, and I decided I’d do that. As soon as I tried to do that, though, it wanted the new sign-in, and it wouldn’t accept either of the new passwords. It helpfully sent six-digit passcodes to my cell phone multiple times, but I still couldn’t get anywhere.

Now on one computer I have about fifteen years’ worth of files of my finances, but I am unable to update them.  On the other computer I have no accounting software, but I could have if I want to take the chance of having a glitchy program without links to my bank accounts.

I tried to get help from the Intuit website but their customer support is one of those community board things that is only helpful if your problem is exactly like someone else’s. I couldn’t even decide which category of help I needed, so I gave up. There is no chat line, phone number, or email address to use, which tells me that they really don’t want to support their customers at all.

Oh, and by the way, Intuit; if you insist on having passwords that are impossible to memorize you should at least let us copy and paste from our secure password-storage program.

Gah! You know what, Intuit?  I think I’m just going to stop keeping financial records. That will make both our lives easier, and I won’t even send you a bill.