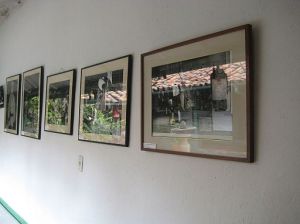 My memory has never been good, but now it is frequently awful. One of my most valuable techniques for overcoming the problem is to always put things away after I’ve used them. This is especially important for things like screwdrivers, scissors, tax files, and Tupperware lids. If things aren’t where they are supposed to be, I waste huge amounts of time looking for them.

Another significant problem with a failing memory is not knowing people’s names.  I recently attended a memorial event at which there were dozens of people whom I knew, but few whose names I remembered. It was awkward.

When I was a college instructor, I would tell my students on the first day of classes that I would probably forget their names and that they shouldn’t take it personally. I’m sure they were really impressed by that. All the advice on good teaching tells us that students learn more from instructors who remember their names, but knowing that doesn’t help when your memory lets you down.

I have tried all sorts of mnemonic tricks like repeating names as soon as I hear them, writing names out, putting names under photos, and so on. They all work up to a point, but over time that point becomes smaller and smaller.

My husband had a very good memory and I grew to depend on it. He had no trouble remembering all sorts of things like names, dates, events, phone numbers, and where I put my keys, so there really wasn’t much need for me to duplicate his efforts. For most of our thirty-one years of marriage I rested on his laurels. Then he got sick and died, and I was left with my worsening memory and lots and lots of lists.

Then I was in an accident and my car rolled over three times. I had, among other injuries, a concussion, and that really didn’t do my memory any good. I can’t say how much effect the accident had on my inability to remember things, but I feel sure things have gotten considerably worse since then. I feel this way because as my memory has declined, my fussiness in keeping things straight and organized has increased.

If I’m in a clothing store, I’ll put fallen items back on hangers and I’ll put misplaced small clothes back in the small clothes section. If items on a rack are in no particular order, I get a strong urge to sort it out. I don’t actually do that, but I want to.

I wasn’t always this organized.  When I was a teenager I left my bright yellow jeans and full-circle skirt lying around the bedroom floor just as much as most people do when they are teenagers. Now, though, I can’t ignore it when things are not put away. I could be having dinner at the home of the most interesting person in the world, but if the dishwasher door is open, I’ll really, really want to close it.

Maybe this has nothing to do with my worsening memory. Maybe it has to do with getting old and persnickety. Either way, it sucks. I promise I will try not to straighten every picture or organize your clutter; I really don’t care about housekeeping all that much. But, I will sometimes consider it.  It’s not about you or your homemaking skills, it’s about me trying to think straight.