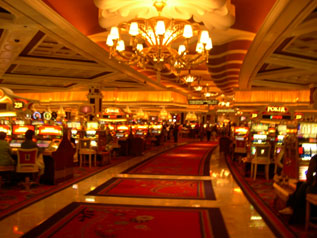 I live in a two-bedroom basement mother-in-law suite. It has all the necessary amenities, is close to my family, and is near to shops and other necessary resources. In some surprising ways, though, it’s a bit like living in Las Vegas.

It is permanently dusk.  You know how, when you are in Vegas, they keep the lighting dim so that you never know what time it is? Well, it’s a bit like that in a basement suite. The windows are high up and relatively small, so there is limited natural light. Because of that the incandescent lights are on most of the time. They give off a warm amber glow that reminds me of autumn colours, 70’s décor, and smoky bars.

I never feel fully awake and alert, which is probably related to the first point. In Vegas, you tend to go to bed late because there is so much to do at night like going to shows, gambling, and drinking. Then you have to get up at a half-decent hour so that the hotel housekeepers can clean the room, and you always feel as though you need two or three more hours sleep. I feel like that a lot even without the shows or the gambling.

Having said that, living here is a bit of a gamble. I took a chance on moving in to the same house as my eldest son and his family. Three of us put our housing budgets on the table, and we were all in. House purchases are usually a gamble, and this isn’t much different from anyone else’s. We hope we won’t lose our shirts, and we’ll be happy if we break even. If we actually come out ahead, it’ll be pure luck. Until we know how it will play out financially, we are managing to get along fairly well. As time goes by, we are getting better at reading each other’s “tells.” It’s as much about knowing the players as it is about the cards in your hand.

Then there is the glitter. In Vegas it is flashing neon lights and shiny showgirls’ costumes. In my apartment the glitter is in the sounds of family life, conversation, and laughter. It makes me smile and gives my mood a little uptick without me having to do anything. It’s better than glitter because it is real, not superficial, but in a strange way it has a similar effect.

No, that’s silly. I’m taking this analogy too far, but you all know how much I enjoy them. It’s how I make sense of my world. I do it too often, though, and someone should stop me. Hula Hoops and Hip Hop are banned in both Las Vegas and my apartment, but so far analogies are tolerated. If they become unwelcome, though, I’ll have to come up with a new literary device. That will be a pain in the ass.

And that’s not an analogy, it’s a metaphor.