How many times have you been to a concert or play and, at the intermission, found a long lineup for the women’s washroom and a much shorter one for the men’s?  We have all experienced that totally ridiculous segregation. On the other hand, at fairgrounds and outdoor festivals we all use the communal, non-gendered, Porta-potties, and they serve both genders equally well (or equally badly, depending on the smell).

Many women have occasionally asked a male companion to ‘stand guard’ while they used the men’s toilets because they couldn’t wait for the ladies’ loos to become available. The first time I did that I looked around and I found that the only differences between women’s and men’s washrooms were the presence of urinals and the absence of a tampon dispenser in the men’s. Everything else—washbasins, faucets, mirrors, cubicles, toilets, hand dryers, floor tiles—was the same.

It made perfect sense to me when Edmonton made all single-stall washrooms in the municipally-run buildings gender neutral.

It has been nearly a year now, and the sky has not fallen. It was really easy and virtually cost-free. All they had to do was change the signs on the doors from stick-figure-in-a-skirt or stick-figure-in-pants, to signs with both stick figures on them or signs that say “All-Gender Washroom.” Everyone got the message and nobody was offended or assaulted.  Edmontonians now just takes turns using the washrooms, and instead of having only one choice of stall, everyone has two.

A Kroger store in Athens, Georgia felt inspired to add an explanation to their all-gender washroom door sign, to show that it was helpful to all sorts of people, not just the LGBTQ community. 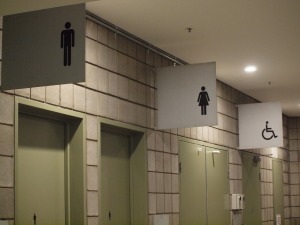 Multi-stall washrooms are still single gender, but I’m not sure why. I think it’s because most men use urinals and they probably don’t want strange women seeing their penises. Really, though, the urinals are not essential. None of us has them in our homes, so why do we have them in public washrooms? It may take a little longer to use a cubicle, but not much.

Perhaps public toilets are segregated because women would not feel safe lowering their panties, even in a locked cubicle, with strange men around. I am very sympathetic to the fears that women have of being assaulted, and I share many of those fears. But, as Katherine Ripley has pointed out “if a predator is after you to hurt you, he isn’t going to be stopped by an un-locked door with an amorphous figure in a triangle dress stamped on the front of it.” In fact, I’d feel safer knowing that if I were threatened by anyone, a man might be able to come to my aid.  If we all agree to use cubicles all the time, there is no reason why we couldn’t all use all available washrooms, regardless of our gender.

A few months ago, some people in Houston got their knickers in a twist over an equal rights ordinance and they used very effective propaganda to persuade citizens to reject it. Part of the plan had been to allow everyone, including transgender people, to use the public washrooms of their choice.  Some of the outrage has grown out of a misconception of transgender people and a fear of the unknown. There was some talk of men dressed in women’s clothing being a potential threat.

There have been very few reports of cis males pretending to be transgender in order to commit acts of violence against women. This is mostly a fantasy from transphobic minds, as attested to by fifteen law enforcement officers and others in a mediamatters.com article. One even said that “the notion of men posing as transgender women to enter women’s restrooms to commit sex crimes ‘sounds a little silly.’” In fact, trans* people, especially transgender women of colour, get beaten/raped/murdered much more often than other people, especially in vulnerable situations like using the washroom.

So, just for a moment, imagine that you are a female-to-male transgender person out shopping and you need to use a public washroom. Imagine also that you cannot find a gender-neutral single-stall washroom.  You know that you face the risk of verbal or physical abuse if you use the men’s washroom, and you cannot comfortably use the women’s washroom if your appearance is masculine. How long do you think you can hold that pee until you either get home or ask someone to ‘stand guard’?

This very real problem could so easily be solved if we just accepted that we can all use the same loos. I would recommend that whenever possible we have public washrooms

redesigned so that the cubicle doors and walls go down to the floor, and then we can all take turns using any of the cubicles. Some of the cubicles could even have urinals in them.

The point is that if we all behave like the civilized society we are supposed to be, we can all use the same public washrooms and we can all stand in lines together. The bottom line, as San Francisco’s city supervisor, David Campos, has said is that,  “going to the bathroom is such a basic necessity that nowhere should anyone have a difficult time or be in danger because of that.”