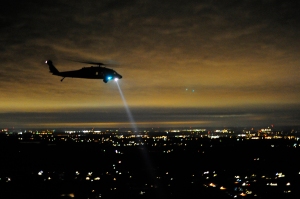 During the night, at around midnight, a helicopter flew round and round above my neighborhood. I am assuming it was a police helicopter, but it wasn’t chasing anyone because it kept coming back. So, what was it doing? Were they looking for someone?

For the second day in a row I have listened to the sound of a helicopter circling overhead. It makes a three-block circle, repeatedly. Yesterday it did this for over half an hour at around midnight. Today it was late afternoon.

I’m assuming it is a police helicopter and that they are doing something important; they are probably catching bad guys. At least, I hope so. Otherwise I lost sleep yesterday for no good reason.

I went online to see if the local paper could tell me what was going on, but there was nothing to explain it. So, I am left to my imagination.

Day three with the darned helicopter. When I went outside to look at the helicopter I saw four police officers walking through the central courtyard of my condo complex.  So, now it’s a bit too close to home and I really, really want to know what is going on.

I checked with some of my fellow condo board members and apparently there were eight police cars out in front of the building. Eight! That seems a bit excessive. Why do they do that? Do they respond to every emergency call with every car in the city?

Rumour has it that one of the apartments was broken into while the resident was home. She locked herself into a bathroom and called police.  I’m glad the police responded but I’m still waiting to hear how it all turned out.

Regardless, this doesn’t explain the helicopter for the last couple of days. I went online to see if I could find out from the local paper or Nextdoor.com if anyone knew what the fuss was about, but there was nothing.

So, here is what I want.

Communication, people. It isn’t that difficult. Unless, of course, it’s classified information and I am not supposed to know. In which case, this is the beginnings of a mystery novel. I’ll just make stuff up to fill in the gaps. Brilliant plan. I could call it “Midnight Choppers,” except that people would think it had something to do with snacks and false teeth.  Then again, who’s to say that it doesn’t?