Someone punched a dent in my metal front door.  They did it before I moved in, and I didn’t think much about it until today. I had just assumed that someone moving furniture in or out had accidentally bumped into the door.  Today, though, the light fell on it at just the right angle and I realized that I was looking at a dent from a fist. You can see where the knuckles hit.

So, now I’m wondering what caused someone to be so angry.

If it was one of the previous owners, I don’t know much about them. I know they were heavy smokers because I had to get the nicotine stains sealed and painted over. I also know that they were unable to pay their mortgage because I bought the place from the bank. The owners lost the property to foreclosure. Maybe that was what caused the rage. 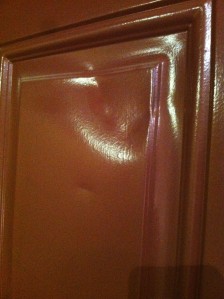 In my imagination, one of the owners, a man, dented my door. I’m assuming that because of the height and depth of the dent. He was so angry at losing his home to the bank that he felt impotent. The feeling and the action came together. His fury expressed itself outward, at the door.

Or, the same man was so upset that someone else (me) would be living in his home that he wanted to make the place imperfect as a way to somehow make me suffer along with him. As he left the house on moving-out day, he punched the door to put his mark on it. A piece of him will always be here.

Or, he came home drunk one night and his wife would not let him in, so he punched the door. He felt good about the fact that he had enough self-control to punch the door instead of her.

Or, he had forgotten his keys and was locked out. He was mad at himself for being so thoughtless and punished himself by swinging his fist into the door. It bruised his knuckles. Then he calmed down.

Or, the couple had split up and she wouldn’t let him back into her life. He began stalking her, waiting in stairwells for her to come home, then trying to persuade her to let him back in. But, she wouldn’t. She knew it would never work. After several attempts at reconciliation, he became increasingly frustrated by her rejection. He was no longer in control, so he punched the door.

Or, he was trying to quit smoking. That’s enough to make anyone punch doors. Yeah, that was probably the reason.

Or, maybe it wasn’t a man at all. It could have been a tall woman. Darn it. Now I’ll have to come up with a whole different set of scenarios.