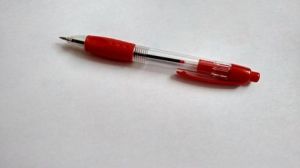 I used to teach writing, and I pushed that grammar boulder uphill every day. Many students would ask why the rules were what they were, and I didn’t always have an answer. Sometimes the answer was ‘just because,’ which is not satisfying in the least. Occasionally I came up with creative and amusing examples to justify things like the Oxford comma, but mostly I just taught the received truth from the textbook.

Looking back, I wish I had asked my students to create justifications for doing things differently. The publishers come up with revised textbooks every couple of years, so why shouldn’t the students contribute to those changes? I was firmly entrenched in the need to conform to the sometimes arbitrary and bewilderingly complex rules of English grammar because I wanted my students to get good grades in all their classes. I knew that correct grammar was going to help them to do that, but at the same time I was keeping them trapped in the perception that there was only one right way.

No-one speaks the way that correct English is written, and that is one of the first hurdles that students have to overcome.  Even when the writing is correct, English grammar has internal inconsistencies such as in the writing of numbers as words or numerals. All-in-all, it’s a hodgepodge of ancient choices and modern revisions.

We can say that some things are correct or incorrect, but the sand can shift under our feet. Words can change their meanings and meanings change with their contexts. The song “Baby, it’s Cold Outside” was once a coy flirtation between consenting adults. Now it’s perceived as an example of rape culture. It surprises me that something I thought was wholesome is heard differently and negatively by a new generation. The words didn’t change, but the culture did. We cannot say today some of the things we could have said yesterday.

On the other hand, there are some brand new ways to say things. I am still struggling with some changes in grammar such as ‘any more’ being flagged as one word instead of two, and the plural pronouns ‘they’ and ‘their’ being acceptable for use when referring to an individual. There is even an emoticon in the dictionary now recognizing that not all that we write is in the form of words.

Language is an ever-changing thing and usually I like that. I love the introduction of new words and idioms, and I admire people’s creativity in coming up with new ways to define their worlds. That is all good. But sometimes I also like the comfort of knowing what is right and what is wrong.

It took me a while, but I just discovered that Microsoft Word has a Canadian English language option.  All this time I have been using the default American English proofreading option, so I got a lot of red lines under things that I thought were correct. It was annoying. In fact, I had started adopting the American style because it was easier to just accept the automatic corrections. Now, though, I’m going to enjoy writing ‘neighbour’ without being scolded. There is, after all, more than one way to get English right.