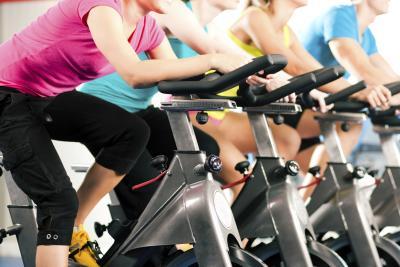 Usually, I listen to music when I work out. Today, though, I didn’t have my iPhone with me at the gym, so I was forced to listen to my own thoughts while walking around the track and peddling on the exercise bike. They are not great thoughts.

I wonder where those stairs go to.

This little old lady has the same trouble buying tops that I do; the sleeves are too long.

And I’m overtaking her. Should I say hello? No, I don’t think that’s gym protocol.

That young man really should not have dropped those heavy weights on the floor. I wonder how much the floor will hold. We are upstairs; if they went through the floor I wonder where they would land.

Does swinging your arms really high make any difference? I’m not going to do it, even if it does. It looks silly.

There is a time counting machine showing 6:50 in really large numbers. I wonder who or what is being timed. Can anyone use it?

And now I’m lapping that woman again. No one else is on the track.

Ooops thought that too soon. Now there is a man jogging with a friend.

9 minutes. I could quit now and no-one would know I hadn’t done 20 minutes.

I think I’ll go to Canadian Tire when I leave here—pick up those curtain rods. Maybe I’ll find some more Christmas gifts, too.

I wonder where those two young men I saw at reception come from. I’m guessing Somalia. No good reason for that guess, though. They looked like newcomers. At least, they looked unfamiliar with this rec centre.  I make too many assumptions.

Ok 15 minutes. I reckon I can do five more minutes.

That shaft of light across the track is quite lovely. I thought at first it was a painted line and I thought maybe it was for staggering the starts of sprinters. Not that I know anything about sprinters or staggered starts.

What would I do if I suddenly ran into Isaac (my former friend from Kenya). I’d probably give him a hug, even though I’d really like to give him a smack. I’ve forgiven him, but still… He was a jerk. And he still owes me.

Snow is melting and water is dripping off the roof directly in front of the doors. A big puddle has been fenced off and people are carefully walking around the fences. I bet the architect who designed this building isn’t Canadian. The roof slopes down to this point. Bad plan.

I think they should shovel the snow off the top of the retaining wall around the trees. Children always want to walk along it instead of the sidewalk. Even with snow on it.

Every woman who comes here with children has about three or four of them. All preschoolers. Are these mothers, or nannies, or neighbours? Seems like a high child-to-adult ratio.

Those two young women were only on the stair climbers for three minutes. That’s not long.

Those two Muslim women are being followed into the building by a skinhead. At least, he looks like a skin head. Will he say anything rude to them? If he did, what would I say?

Me: Hey you can’t talk to them like that!

He: I can say whatever I like. It’s a free country.

Me: No, you can’t harass people. And anyway, you were being rude.

He: Mind your own business

Me: I think you should leave.

Stranger: Yeah. Everyone is welcome here except you.

Someone is cruising around the parking lot waiting for someone to leave so that the can take their parking space. They must not know about the overflow parking lot down the road. Or, maybe they don’t want to walk half a block. Odd how people want to park close to the doors even when they are going to exercise.

A man just came outside to smoke. No, I am not judging. Not really.