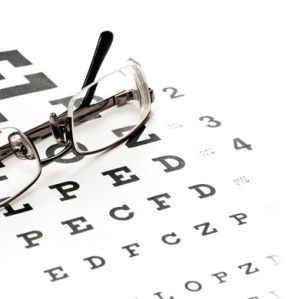 It has been a couple of years since I got my eyes checked and four years since I got new glasses, so I thought it was time for a review.  I was expecting, if anything, that I needed a slight change in my prescription.  I wanted some new glasses because I wasn’t thrilled with the ones I have.  The style is a little out of date, the lens transitioning process from outdoors to indoors isn’t as fast as I would like, and there is a small scratch on one lens.  So, yes, it was time for a review.

The eye exam was slightly different from the kind I have become familiar with in that they used a new gizmo.  You rest your chin and forehead in front of the viewer and, after the assistant says “begin,” you have to click every time you see a small square set of wavy lines appear in random locations on the screen.  Sometimes they are dark and clear, sometimes they are faint, and sometimes you just imagine you saw them. It feels like a test of not only vision but also patience and reflexes. My patience is in good shape but I’m not sure about my peripheral vision or my reflexes.

That exercise was followed by the use of another machine with which I focused on the image of a boat in the water while the assistant fiddled with the settings until the boat sank. Well, it just kind of faded away really, but this was the same day that we became aware of drowned refugees, so the imagery was a little too poignant for me.

I also had pictures taken of the backs of my eyes, and after that, I got to see the doctor who did all the usual tests with the lens swapping machine. That’s the one where you are supposed to identify the better lens from a number of dual choices while trying to read lines of upper case letters. This starts out well enough, but after a while you can’t tell any more. It’s designed to make you feel like a vision-impaired dunce and grateful for their offerings of new glasses.

So, things were going more-or-less as I anticipated until the doctor said I had cataracts and would have to have surgery on both eyes.  What?? Wait. No. That can’t be right.  My vision isn’t very much different than it was two years ago. The doctor talked some more, but I honestly can’t remember much of what he said after I heard the word “surgery.”

I remember asking him how much it would cost and was relieved to know that this would be covered under my provincial health care plan. Apparently each eye is to be operated on separately with some weeks between each operation.  I asked for some information to take home with me, but they had no pamphlets on cataract surgery. I asked if there is a website I could go to for more information, but I can’t remember the name of the site he recommended.

I made an appointment for a follow-up test to provide the doctor with more detailed information, and I left the office in a daze. In addition to being afraid of someone doing surgery on my eyes, I don’t know where this would be done, who would do it, how I would get to and from it, or what recovery would be like. Can I continue to take care of myself at home or will I need help?  I have lots of questions and, at the moment, not many answers.

The Internet will give me some general information about the process, but only my doctor can give me specific information about what is to be my experience. Next time, I’ll take notes. Or, better yet, maybe I’ll take someone with me.  I need to borrow someone else’s memory in case my mind goes AWOL again.