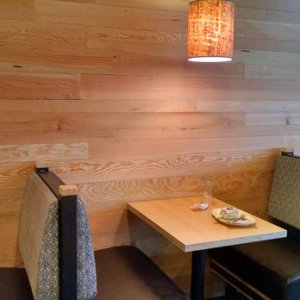 He’s not really “mine,” of course. Actually, he looks like he isn’t anybody’s right now. He’s someone who may be a transient or homeless or both, but I don’t really know for sure.

I met him first because he stopped me when I was walking downtown. He looked a bit disheveled but he was very polite. A little bit too fawning, actually. He said, “Excuse me, ma’am. I really hate to bother you, but I was a marine and…” That’s where I cut him off. I said “I don’t have any change,” and started to walk away.  He said “I wasn’t asking for change,” but by then I was a few steps away and I kept on walking.

It bothered me. I was a bit annoyed and slightly threatened by the fact that he did not take my negative response at face value, but continued to engage me in conversation. Also, I didn’t know why he had stopped me if it wasn’t for money, and I didn’t want to find out.

Sometimes I give money to street people who ask for it and occasionally I actually buy them a sandwich if they say they want money for food, but there is no consistency to my responses. Mostly I just don’t carry cash any more so that I can honestly say I don’t have any.

I had almost relegated the experience with my marine to the dark recesses of my mind where I keep encounters with homeless people and beggars, when I came across him again.

I was at a popular lunch restaurant with my sister and brother-in-law, and when we sat down at a table I saw him sitting alone.  He had his head down and appeared to be sleeping at one of those single-person booths. They actually have two seats facing each other, but usually they are occupied by people eating alone. My marine had put two backpacks on the seat facing him, and he looked a lot cleaner and neater than the last time I had met him.

He had that military buzz cut that is so distinctive, and he was clean-shaven. His clothes were clean, and although his shoes looked well-used, they weren’t very dirty. When he awoke, he gazed out of the window for a long time, and sipped at something in a plastic mug. After about fifteen minutes, he went to the condiments counter and brought back a container of honey. Then he took a bread bag out of one of his backpacks, and removed two slices of bread. There were two remaining slices which he carefully wrapped back up and put back in his bag. He put honey on his bread and made a sandwich which he then ate.

Nothing about his behavior drew attention to himself, but I was sitting right across from him and couldn’t help noticing. I also recognized him from our previous encounter.

When we left the restaurant I stopped by his table and asked if he would allow me to buy his lunch. When I put a few dollars on his table, he looked at me and his face lit up. He thanked me and I left. After I got home I wondered why he was in this predicament and if Veterans Affairs is helping him at all.

I also did a little soul-searching. Why did I not want to help him when I met him on the street, but I did want to help him when I saw him in the restaurant?  I don’t have an answer to that, except to say that I felt more vulnerable when alone than I did when I was with my family. Also, he looked a little scruffier the first time than the second, and that affected my response.

It’s easier to dismiss the needs of the homeless if we think of them as derelicts and drug addicts, but it’s harder to ignore polite clean-cut veterans.