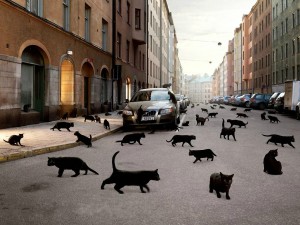 If you think that by putting yourself forward as a community volunteer you will be received with warm appreciation, you are wrong. At the beginning of the process, you are more likely to be confronted with bureaucratic bewilderment.

Recently, I have tried to volunteer at three different events using four different websites. Only one was easy to use. One was so complex I decided to leave it for another day. I recognize that organizing volunteers is a lot like herding cats, but given the wonders of our technologies you would think that the initial sign-up would be relatively painless. Not so.

First, I wanted to sign up as an usher and set-up person at a food and wine festival. I went to the website and dutifully filled out my information together with the list of days and times I am available. Subsequently, a couple of weeks later, I got an email from the volunteer coordinator asking me to fill a different form that was not markedly different from the first one, but apparently it was different enough that it mattered. Now I’m wondering if my name is on two lists or just one.

Then, I wanted to volunteer at a film festival as an usher, so I went to the orientation for volunteers. The preamble and motivational video were fine, but then we were introduced to the various volunteer section leaders and it became confusing. Some held up small signs indicating which type of volunteer work they were responsible for, and some did not. Some used a microphone so that we could hear them describe the various tasks and some did not. None of them explained to us what to do next.

Suddenly, the presentation was over and the audience of potential volunteers all swarmed to the front of the theater and huddled around the various section leaders. I am a short person, and I couldn’t find the leader for the ushers. I did, however, find the leader for the box office, so I signed on with him instead. It was not a complete train wreck, but close.. Someone asked me to fill out a form that was being passed around on a clipboard, but it never got to me so I didn’t fill it out. Also, I hadn’t brought a pen, so I was clearly inadequate to the task. At one point, I asked to borrow someone else’s pen but she said “No.” She needed it to fill out another form.

After a few days, I got an email from the person who was creating a spreadsheet of volunteers for the box office, so I filled my contact information in a tiny font in the appropriate spots and sent it back. Two days later, I got an email from the organizer for the ushers. She sent me to a website that is set up for just this kind of task and it was fairly easy to use. Three cheers! I wondered why the box office people had not used the same website, and then I wondered why the film festival as a whole had not utilized that service. I’m sure I’m not the only one volunteering for more than one task, and it would be nice if we could sign up in just one place.

Anyway, I was resigned to the fact that coordination among volunteers is difficult, and I was going to let it pass until today. This afternoon I got an email from the city in response to a question I had sent them online. I had asked whose job it was to pick up litter in places that are not in front of houses or businesses. When I am walking out and about, I notice that empty lots, boarded up buildings, and places underneath highway overpasses are all likely to be sites for a lot of litter. I also asked them if I were to pick up the litter myself, where I should put the trash bag so that it could be collected. The city’s response was not to answer my questions but instead to provide me with a link to their volunteer page. Actually, it is a page with multiple links to multiple volunteer pages. So many, in fact, that I was completely bewildered. I didn’t actually want to be an official volunteer in this instance. I just wanted to pick up some trash, so that is the website I have left for another day.

This process of being a good citizen can be exhausting without even leaving the house! However, from past experience I know that once you are established in a volunteer role, the organizers are very appreciative. Until that time, however, you must be prepared for a lot of confusion and form-filling. You may even find that you are not wanted at the times you are available. Please don’t be discouraged by this. It’s not personal. It’s just that we volunteer cats are not easily herded.